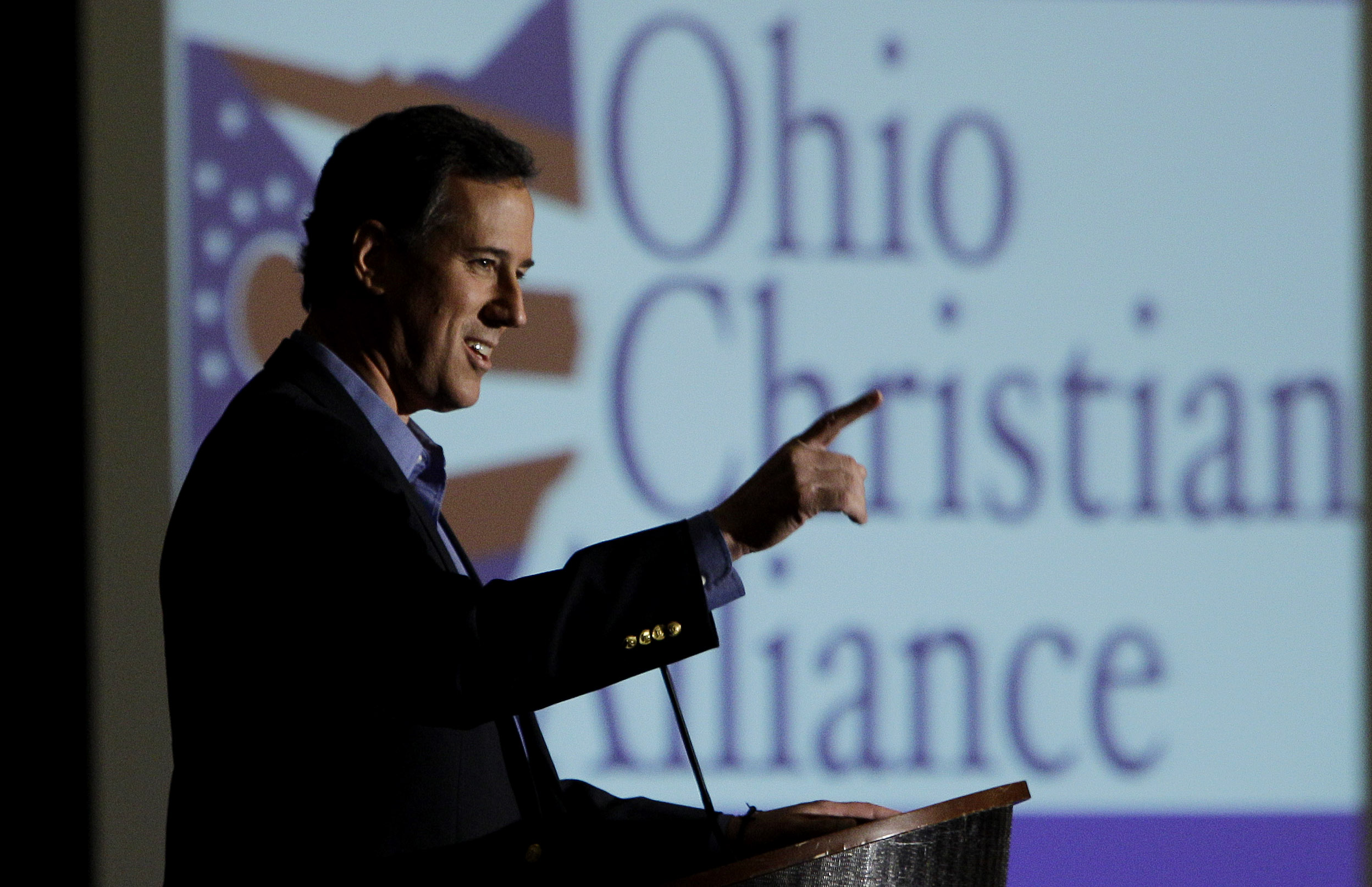 COLUMBUS, Ohio - Campaigning in Ohio on Saturday, Rick Santorum displayed his culture-warrior side in full force, as he harshly attacked President Obama by suggesting the president wanted to see more disabled babies aborted and accusing him of projecting his values - which Santorum claimed were not rooted in the Bible - on the Catholic Church.

Santorum recalled his prominent role in the 1990s debates over the controversial procedure that critics call partial-birth abortion. He lambasted the president's health care law requiring insurance policies to include free prenatal testing, "because free prenatal testing ends up in more abortions and therefore less care that has to be done because we cull the ranks of the disabled in our society."

"That, too, is part of Obamacare, another hidden message as to what President Obama thinks of those who are less able than the elites who want to govern our country," Santorum said.

Prenatal tests are a standard part of modern medical care. The Department of Health and Human Services says such tests "help keep you and your baby healthy during pregnancy. It also involves education and counseling about how to handle different aspects of your pregnancy."

After devoting much of his speech to the health care law, an occasionally testy Santorum found himself the subject of reporters' regarding his socially conservative stances.

Earlier in the day, the former Pennsylvania senator charged that Obama's agenda is "not about you ... It's about some phony ideal. Some phony theology. Not a theology based on the Bible." That prompted Obama campaign spokesman Ben LaBolt to call Santorum's comment "the latest low in a Republican primary campaign that has been fueled by distortions, ugliness and searing pessimism and negativity." LaBolt said it was "a stark contrast with the President who is focused every day on creating jobs and restoring economic security for the middle class."

But Santorum doubled down on his attacks, accusing the president of forcing a new moral code on the Catholic church.

"The president has reached a new low in this country's history of oppressing religious freedom that we have never seen before," he said. "If he doesn't want to call his imposition of his values a theology, that's fine, but it is an imposition of his values over a church who has very clear theological reasons for opposing what the Obama administration is forcing on them."

Santorum's high-profile role on such issues ensures that questions about his social positions will follow him across the country and through a general election campaign, should he win the nomination. Despite the firestorm they ignite at times - and the fact that it can produce lower poll numbers among women voters - the former Pennsylvania senator said he doesn't intend to let up.

"You ask a lot of questions about the social issues," he accused a reporter who asked if he would speak out on those issues during a general election race. "I'm going to talk about the things that I think are important to this country. I've done so throughout the course of this campaign, and I'll continue to do so."