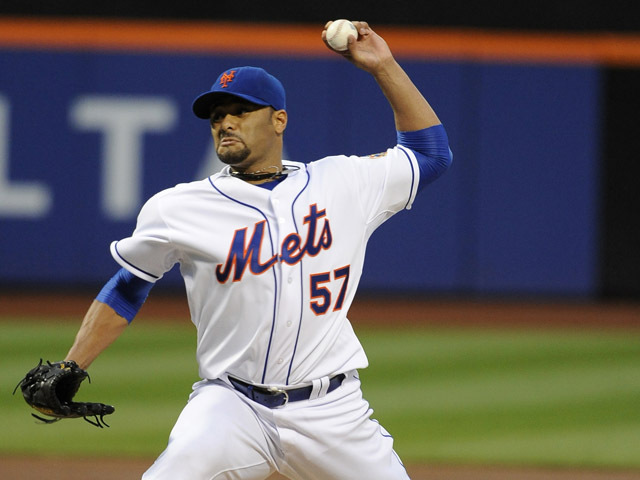 (AP) NEW YORK - Johan Santana pitched the first no-hitter in New York Mets' history, helped by an umpire's missed call and an outstanding catch in left field in an 8-0 victory over the St. Louis Cardinals on Friday night.

After a string of close calls in their 51-season history, Santana finally finished the job in the Mets' 8,020th game since the team was born in 1962.

"Finally, the first one," Santana said. "That is the greatest feeling ever."

He needed a couple of key assists to pull it off.

Carlos Beltran, back at Citi Field for the first time since the Mets traded him last July, hit a line drive over third base in the sixth inning that hit the foul line and should have been called fair. But third base umpire Adrian Johnson ruled it foul and the no-hitter was intact — even though a replay clearly showed a mark where the ball landed on the chalk line.

Hometown kid Mike Baxter then made a tremendous catch in left field to rob Yadier Molina of extra bases in the seventh, crashing into the wall and getting injured in the process.

Making his 11th start since missing last season following shoulder surgery, Santana (3-2) threw a career-high 134 pitches. He struck out eight and walked five in the majors' third no-hitter this season.

"Amazing," Santana said. "Coming into this season I was just hoping to come back and stay healthy and help this team, and now I am in this situation in the greatest city for baseball."

Phil Humber pitched a perfect game for the Chicago White Sox at Seattle on April 21 and Jered Weaver of the Los Angeles Angels no-hit Minnesota on May 2.

Santana got a warm ovation as he headed out to the mound for the ninth inning, and the two-time Cy Young winner quickly retired Matt Holliday and Allen Craig on shallow fly balls.

With the crowd of 27,069 on its feet in a frenzy, World Series MVP David Freese went to a 3-2 count before his foul tip was caught by Josh Thole, just activated from the disabled list earlier in the day.

The Mets rushed out of the dugout and mobbed Santana in a raucous dogpile as security tackled a fan who ran onto the field near home plate. Moments later, the big scoreboard in center flashed his picture and read "No-Han."