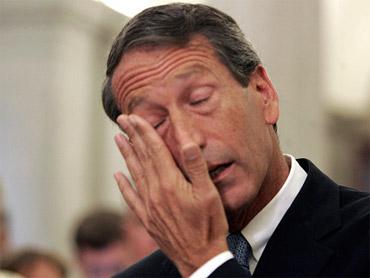 (AP Photo/Mary Ann Chastain)
South Carolina Gov. Mark Sanford has been unusually candid about his affair with a 41-year-old former reporter in Argentina.

In stark contrast to the taciturn Eliot Spitzer – who made no mention at all of his escapades as "Client 9" except opening his resignation speech with a reference to his "private failings" – Sanford held forth at length with reporters last week, describing how the affair came about and at one point prefacing an answer with, "To give you way more detail than you'll ever want…"

Then there were the e-mails. Perhaps Sanford shouldn't be judged on those, given that they were private communications. Serious questions remain about how South Carolina's State newspaper came to posses and publish them.

But never fear. The (new) Love Gov was back at it today, telling an Associated Press reporter that "This was a whole lot more than a simple affair. That it's a love story – a forbidden one, a tragic one, but a love story at the end of the day."

Sanford seemed more focused on defending the affair than apologizing for it.

"It was wonderful," he said. "Something that I've never been able to put my hands on was there. I remember there was an older couple sitting to our right, and I remember them watching us, in the way that we interacted. They could see a spark, or, I don't know what you'd call it, but there was something there."

Sanford also admitted that he had flirtations - including dancing and physical contact - with a number of other women in Argentina. But, he said, except with the woman identified last week as Maria Belen Chapur, the relationships did not become sexual:

Again, I didn't cross the sex line. I went past the line – but this makes it sound like there are hundreds of people, or something. … I'm quite certain that there were a handful of instances wherein I crossed lines I shouldn't have crossed as a married man but never crossed the ultimate line.

Sanford referred several times to death and the notion of God's final judgment on his life.

"Every one of us is going to be at that death bed one day and we're going to look back over the whole of our lives and we're going to ask, you know, 'Was or I wasn't willing to risk certain things that may be viewed as stupid trade-offs by the rest of the world?" he said. "But that's for each person to determine on their own."