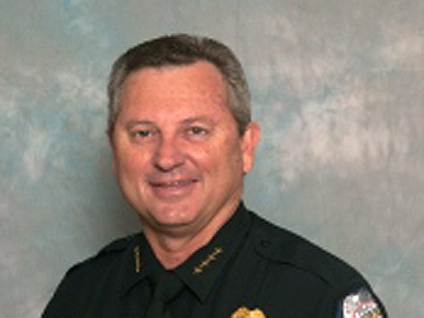 (CBS) SANFORD, Fla. - Bill Lee, the police chief at the center of a national firestorm over the investigation into the shooting death of Trayvon Martin, announced he was temporarily stepping down Thursday.

In a press conference the day after Sanford's City Commission voted by 3-2 "no confidence" in the chief, Lee said that his presence had become a "distraction" that was "overshadowing the process" and he would take a temporary leave of absence.

"I stand by the Sanford Police Department and its personnel," said Lee. He said he decided to remove himself "to restore some semblance of calm to the city which has been in turmoil for several weeks."

Lee has come under fire for refusing to press charges against George Zimmerman, the neighborhood watch volunteer who shot and killed the unarmed teenager Martin on Feb. 26. Zimmerman claimed he killed the teen in self-defense and Lee has said that under the state's controversial "stand your ground" self-defense law, the department has no grounds to charge him.

Zimmerman has been free, but in an undisclosed location since shortly after the shooting.

Neither Lee nor City Manager Norton M. Bonaparte, Jr. took questions after the short press conference and did not elaborate on what "temporarily " meant.

The Department of Justice is investigating the shooting, and a Seminole County grand jury will meet April 10 to hear evidence in the case.

On Wednesday, hundreds of people gathered in New York City for a "Million Hoodie March" to show support for Trayvon Martin's family, and demand Zimmerman's arrest. Rev. Al Sharpton is in Florida today and is scheduled to hold a press conference with the Martin family at 4:30pm.