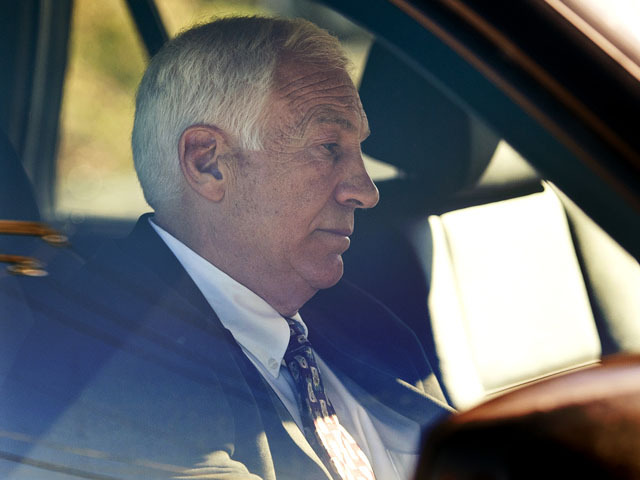 Former Penn State assistant football coach Jerry Sandusky is once again denying he ever molested children, this time to The New York Times.

Sandusky has been charged with 40 counts of sexually abusing young boys. More alleged victims have come forward since grand jury findings were released.

Previously, Sandusky had denied the charges against him to NBC's Bob Costas, but hesitated when he was asked if he was attracted to young boys. When the Times asked him about his reaction to Costas' question, Sandusky said, "I was sitting there, saying, 'What in the world is this question? You know? What -- you know what -- am I going to be -- if I say, "No, I'm not attracted to boys," that's not the truth, because I'm attracted to young people, boys, girls."'

Sandusky's attorney then interrupted and said Sandusky is attracted to children, but not sexually attracted to them.

Jo Becker, the Times reporter who interviewed Sandusky for four hours, said Sandusky agreed to the interview because he feels like his life's work with children has been "twisted."

"His lawyer, Joe Amendola, also said, essentially, that, Sandusky's actions and the way he interacted with children could be seen either as a man who really likes children, or fitting the profile of a pedophile," Becker said on "The Early Show."

"He was investigated in 1998 by the university police, and then again, there was an incident in 2002 they did not go to the police over," Becker said. "But in both of those instances, he said, after -- following those incidents -- Joe Paterno never spoke to him about it. He doesn't know whether Joe Paterno was told, but all he can say is that he never spoke to him."

But, does this interview actually make prosecuting Sandusky easier?

One victim's lawyer, Becker noted, has said the interview corroborates the client's case.

"He says things like ... 'I did call these kids' -- one of the victims, 'dozens of times, but it was to study,"' Becker said. "(He said) 'I called another kid after the grand jury convened, but it was because I thought he would be my character witness; I didn't realize he was a victim.' He says at one point that he thinks the prosecution's case against him is unfair, though some of the things could be plausible. You know, he says at another point that he readily acknowledges giving kids money, setting up savings accounts for them, giving them gifts that were donated to the charity, like computers and golf clubs. So the prosecution doesn't have to prove any of that anymore. Of course, the prosecution's take is this was classic, sort of, 'grooming' behavior. His take is, you know, he was generous and wanted to reward kids for achieving academically."

Sandusky checked with his wife prior to doing the interview, Becker said, adding that the coach's inner-circle has "diminished considerably." Becker said, "Here's a guy who, you know, all over State College, everybody wanted to be his friend and go to the golf tournaments that they held to raise money for (his charity) Second Mile," Becker said. "And, today, he says pretty much, you know, it's his wife and his kids and his dog."