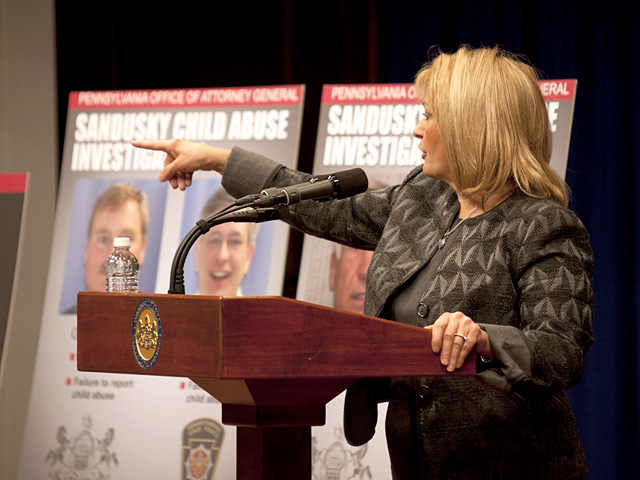 Pennsylvania officials described a sexual abuse case involving a former Penn State football coach and two administrative officials as "a case about children who have had their innocence stolen from them and a culture that did nothing to stop it or prevent it from happening to others."

They weren't required to enter pleas but they had to surrender their passports.

At a press briefing Monday Pennsylvania Attorney General Linda Kelly said the indictment "details a disturbing pattern of sexual assaults on young boys," whom Sandusky met through his involvement in the charitable organization The Second Mile, which he founded.

Investigators on Monday encouraged anyone who would accuse Sandusky of sexual assault to step forward and talk to police. Kelly specifically asked that a child reportedly assaulted by Sandusky in view of a graduate student to call detectives about the 2002 encounter.

She also said the university's longtime football coach, Joe Paterno, is not a target of the investigation into how the school handled the accusations.

Kelly said some of the alleged attacks occurred while Sandusky was a coach at Penn State, and others occurred on the Penn State campus where, she said, Sandusky had unlimited access to as part of his retirement agreement.

Kelly described a 2002 incident in which a graduate assistant witnessed a sexual assault on a boy about 10 years of age and reported it to university officials.

"Those officials and administrators to whom it was reported did not report that incident to law enforcement or to any child protective agency," Kelly said. "And their inaction likely allowed a child predator to continue to victimize children for many, many years."

According to the indictment, the graduate assistant reported that he witnessed Sandusky sodomizing a young boy in the shower at the Lasch Football building. He later testified that he told coach Joe Paterno the very next day.

Prosecutors say Paterno alerted athletic director Tim Curley. Curley called in Gary Schultz, the university's senior vice president for finance and business. A week and a half later, both met with the graduate assistant, but never contacted police.

Sandusky (left) was arrested on Saturday. Late Sunday, Curley and Schultz resigned. Curley requested to be placed on administrative leave so he could devote time to his defense, and Schultz will be going back into retirement, university President Graham Spanier said.

Both men have maintained they are innocent of any wrongdoing.

State Police Commissioner Frank Noonan, who was previously the chief of investigations at the attorney general's office, characterized the actions of Sandusky as described in the indictment as "grooming, where these predators identify a child, become mentors. They're usually children that they're having a little difficulty, they're at-risk children. Through the program he was able to identify these children, give them gifts, establish a trust, initiate physical contact which eventually leads to sexual contact, and that is very common in these type of investigations.

Noonan said subsequent reports of activity were ignored, and in the case of the 2002 incident police were not notified. "And that's very unusual. I don't think I've ever been associated with a case where that type of eyewitness identification of sex acts taking place where the police weren't called."

The case has rocked State College, a campus town routinely ranked among America's best places to live and nicknamed Happy Valley. Under Paterno - who testified before the grand jury and isn't considered a suspect - the teams were revered both for winning games, including two national championships, and largely steering clear of trouble.

In a statement issued Sunday, Paterno called the charges shocking.

"The fact that someone we thought we knew might have harmed young people to this extent is deeply troubling," he said. "If this is true we were all fooled, along with scores of professionals trained in such things, and we grieve for the victims and their families. They are in our prayers."

Sandusky spent three decades at the school running the defense. The charges against him cover the period from 1994 to 2009.

Sandusky, who is married and has six adopted children with his wife, Dottie, retired in 1999 but continued to use the school's facilities. University officials said Sunday they were moving to ban him from campus in the wake of the charges.