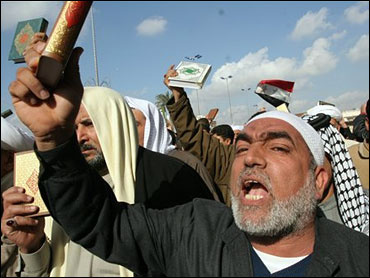 Marathon runner Jesus Sanchez needed all the stamina he could muster Wednesday afternoon against the Houston Astros.

The 5-foot-10, 150-pound rookie held up well in 92-degree weather, allowing one earned run in seven innings to help the the Florida Marlins beat Houston 5-3.

Sanchez, who has run marathons in his native Dominican Republic, smiled and shook his head when asked about the sweltering conditions.

"Whoooo -- it was really hot," he said. "The last two innings, I couldn't see home plate too clearly because my eyes were burning. In a marathon, you can stop and do anything -- throw water on your face or whatever. When you're pitching, you're out there and you can't do anything until you finish the inning. It's really different."

Derrek Lee hit a three-run homer to support Sanchez (5-6), who won for only the second time in his past 14 starts. He allowed six hits and three runs, two unearned.

"He pitched an outstanding game," manager Jim Leyland said. "He's in as good a shape as anybody in the league. He can run all day in that heat. It's unbelievable."

"I'm not going to say I'm not a little upset about it," Biggio said, "but I really would have rather won the ballgame. I'll just have to start another one."

Manager Larry Dierker sad he never found an opportunity in the late innings to use Biggio as a pinch-hitter with a chance to tie the game. The final seven Astros went down in order, with Matt Mantei striking out the side in the ninth for his sixth save.

Mike Hampton (9-6) allowed five runs in five innings and hurt himself with a throwing error for the Astros, who have lost six of his past seven starts.

"I didn't throw strikes," he said. "I had terrible location. I just didn't have it. It was a struggle from the first inning on."

C.J. Nitkowski took the mound for the first time since Monday, when he hit three consecutive Marlins and broke Craig Counsell's jaw with a fastball. Nitkowski drew boos from the crowd, then struck out Edgar Renteria to end the eighth inning.

John Cangelosi doubled to start the third inning and, following a walk and a forceout, Lee lined his 13th homer over the scoreboard in left field for a 4-0 lead. Lee also struck out three times, but he broke the Marlins' record for home runs by a rookie, set by Jeff Conine with 12 in 1993.

"That wasn't a goal, but it's good news," Lee said. "Jeff Conine was a great player here."

Sean Berry hit his seventh homer of the season in the seventh for the Astros, who completed a 4-2 road trip. They finished the season series against Florida 6-3 but lost two of three this week in Miami.

"We kind of unraveled here," Dierker said. "If we're going to be a championship team, we need to try to win this kind of series."

The Marlins went ahead 1-0 in the second when Ryan Jackson doubled with two outs and scored on Mike Redmond's single. They added an insurance run in the sixth on two walks and an error by Hampton, who fielded a grounder and then threw the ball into center field trying to start a double play.

The Astros had runners at second and third with one out in the second, but their threat ended with an unusual double play. Tony Eusebio struck out on a pitch in the dirt that rolled away from catcher Redmond. When Moises Alou tried to score from third, Sanchez retrieved the ball and flipped it to Redmond, who tagged Alou for the third out.

The rock samples will streak across the sky over the Australian outback as they plummet to Earth.