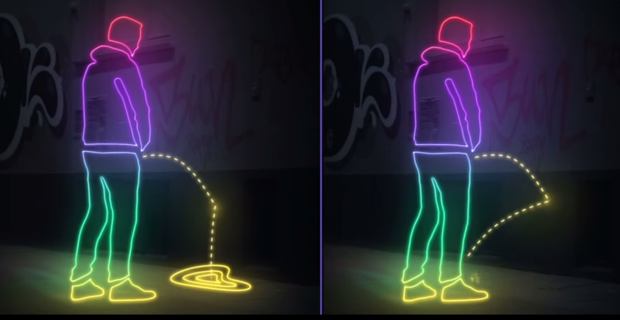 SAN FRANCISCO - Almost every city struggles with the problem of not having enough bathrooms, leaving smelly problems for the public to endure.

San Francisco earlier this year began investigating a novel approach to clean up the human waste in certain areas: walls that send the pee back. The city is notorious for its stench in some neighborhoods, stemming from those who pee in public. The Chamber of Commerce said it is a growing concern and a quality-of-life issue.

The city's new weapon against the problem is a pee-resistant paint called Ultra-Ever Dry, made by a Florida-based chemical cleanup and waste management company called Ultra Tech. The company describes it as "super-hydrophobic" and says it has practical applications, water-resistant boots and gloves being a prime example.

So far, it's been applied to nine city walls throughout the city, reports the San Francisco Chronicle. There are plans for more.

The liquid-resistant paint is already being used in other cities, including Hamburg, Germany, known for unruliness in its red-light district.

Community group IG St. Pauli painted walls in the neighborhood and hung signs warning, "Do not pee here. We pee back!"

A YouTube video of the Hamburg experiment is what grabbed San Francisco leaders' attention (watch it below).

In the first six months of 2013, San Francisco received more than 5,600 requests for steam-cleaning sidewalks, the majority of which were caused by human feces, according to CBS San Francisco. Bay Area Rapid Transit officials say human feces is responsible for gumming up many subway station escalators.

In June of 2012, work crews opened up the broken BART escalator at San Francisco's Civic Center Station and found so much human waste that they had to call in a hazardous-materials team, the station reported.