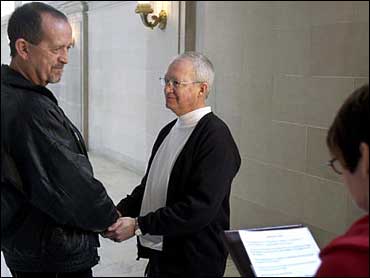 Gay and lesbian couples from across the country answered this city's Valentine's Day invitation to wed in an unprecedented spree of same-sex marriages that has challenged California law and sent conservative groups scrambling for court intervention.

About 300 people lined up Saturday morning outside City Hall to secure marriage licenses - and then take each other as "spouse for life" in brief vows that have given San Francisco's seat of government the feel of a Las Vegas wedding chapel.

Rodney Vonjaeger and his partner John Kussmann, both 37, drove overnight from San Diego and arrived at 3 a.m. Saturday.

"We decided if there was ever an opportunity we would do it, so the drive wasn't even a consideration," Vonjaeger said as he waited in line Saturday. They set the hotel alarm for 8 a.m., "but we were up at 7 because of the excitement."

It was the third straight day that officials issued the licenses to hundreds of gay and lesbian couples. The response has been so overwhelming that nearly 200 city officials, led by newly elected Mayor Gavin Newsom, have volunteered to pitch in, from sheriff's deputies providing security to clerks processing the licenses.

Across the country, other gay couples didn't wait for a marriage license. About three dozen same-sex couples exchanged vows at Philadelphia's LOVE Park on Saturday as part of a "mass commitment ceremony" organized by a gay-friendly church.

Led by a minister, the couples gathered in front of Robert Indiana's famed "LOVE" sculpture - a rainbow flag draped under it - and repeated their vows.

"If they're not going to let us get married, we're going to do it anyway," said Dan Farley, shortly after exchanging silver rings with his partner, John McCann.

Despite legal challenges from advocates of traditional marriage, San Francisco's wedding march was expected to continue throughout the long holiday weekend.

By late Friday, city authorities had officiated at 665 same-sex weddings in City Hall, and issued still more licenses. City officials said they would welcome license applications on Saturday, Sunday and Monday - President's Day - to accommodate couples that have come here from as far away as New York.

CBS News correspondent Vince Gonzales says thousands of couples will have made the move before the holiday weekend is over.

On Friday, a judge denied a petition to block more licenses from being granted. Two separate groups of opponents were asked to return Tuesday for a hearing.

Gonzalez says, "The licenses make it tougher for gay marriage opponents-- who may now have to prove couples who sought and obtained a legal committment for life broke the law."

Lawmakers are proposing a constitutional amendment that would define marriage a union between one man and one woman, and the Legislature resumes its deliberations of amendments on March 11.