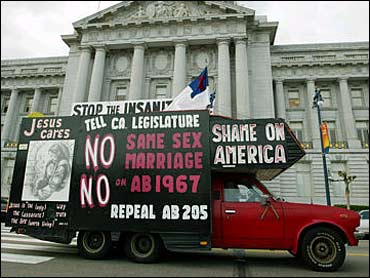 After sanctioning more than 2,700 gay marriages in the past week, the city said Thursday it is suing the state of California, challenging its ban on same-sex marriages on constitutional grounds.

"The city is going on the offensive today to protect the mayor's action," said City Attorney Dennis Herrera, as he announced the lawsuit.

Two judges are already considering challenges from conservative groups seeking to halt the marriage spree that began last Thursday. The city's lawsuit asks that those cases be consolidated into one case.

A hearing on one of the anti-gay marriage lawsuits is set for Friday.

The city is asking Superior Court Judge James Warren to declare unconstitutional two sections of the California Family Code that define marriage as a union between a man and a woman.

City officials want the judge to determine if restricting same-sex couples from marrying violates the equal protection and due process clauses of the California Constitution.

On Tuesday, Warren gave the city the choice of ending the same-sex wedding march or returning to court in late March to show why the process has not been halted. The city said it would continue issuing such licenses until forced to stop.

"The city's move really joins the battle and may even expedite a quicker resolution to this issue. After being a defendant in two cases designed to stop same-sex marriages, San Francisco now is playing offense by making its arguments that the equal protection clause of the California constitution not only permits the City to hand out these licenses but gives those licenses the force of law," says CBSNews.com Legal Analyst Andrew Cohen.

"Cities and states fight each other in court all the time so this isn't terribly surprising or unusual. All the suit really does is close the circle procedurally between all of the interested parties. And I think it will allow the California courts - if they want to - to expedite the resolution of this matter. It's not as if San Francisco has raised issues it didn't already raise in the past week or so defending the issuance of the licenses," says Cohen.

San Francisco's defiant choice to perform same-sex marriages by the hundreds is reverberating nationwide as gay-rights groups celebrate, their adversaries hope for a backlash and politicians wrestle with how to respond.

Mayors in Chicago, Salt Lake City and upstate New York spoke favorably of the weddings, but many politicians — including some liberal Democrats — are unsettled by the spectacle of more than 2,700 gay and lesbian couples wed over the past week at San Francisco's city hall.

On the Republican side, President Bush said the San Francisco weddings troubled him, and could influence his decision on whether to support the proposed constitutional amendment.

Yet some conservative groups felt both Bush and California's Republican governor, Arnold Schwarzenegger, have been too timid.

"A real terminator would end the anarchy by enforcing the law he swore an oath to uphold," said Jan LaRue, chief counsel for Concerned Women for America, in reference to Schwarzenegger — who asked Newsom to stop the marriages. LaRue's organization said the Justice Department and California officials should consider launching criminal proceedings against the San Francisco mayor and his staff for performing illegal marriages.

The Lambda Legal Defense and Education Fund, a gay-rights organization, said it had analyzed relevant California laws and determined that threats of criminal action "are groundless and should be ignored."

Even before the San Francisco weddings, gay marriage had emerged as a volatile election-year topic, largely because of the Massachusetts Supreme Judicial Court's ruling last year that the state must start recognizing gay marriages as of May 17.

"Where's the rule of law?" asked Tony Perkins, president of the conservative Family Research Council. "You have judges acting like legislators in Massachusetts, and you have a mayor acting like a judge in San Francisco. They need to go back and read their job descriptions."

He predicted a surge of support for the proposed amendment banning gay marriage as non-California couples who wed in San Francisco return home and seek recognition of their unions.

There were no immediate reports of other elected officials emulating Newsom by authorizing same-sex marriages, but a handful of mayors made supportive comments.

Chicago Mayor Richard Daley said he would have "no problem" with Cook County issuing same-sex marriage licenses. Regarding gay couples, Daley said, "They love each other just as much as anyone else."

In Plattsburgh, N.Y., the openly gay mayor said he supports same-sex marriage even though many of his fellow Republicans differ.

"I am on the opposite side of this issue — I understand that — but, as a gay man, I have to fight for equality," Daniel Stewart told the Press-Republican of Plattsburgh.

Salt Lake City Mayor Rocky Anderson, an honorary board member of the pro-gay-marriage group Freedom to Marry, said he welcomed the developments in San Francisco and Massachusetts.

"The more people become familiar with the impacts of marital discrimination on so many people, the greater progress we're going to see," Anderson said.

In New York City, a spokesman for Mayor Michael Bloomberg said that, though a supporter of gay-rights, the mayor had no intention of following Newsom's path.

"The mayor does not believe in subverting the law to make a political point," spokesman Ed Skyler said.

"However, this fight ultimately is about what America thinks is fair, and in that sense Mayor Newsom has done a great service," Coles said. "Americans watched on television as hundreds and hundreds of people stood in the pouring rain all night to get married, and a fair number of them probably thought, 'Gee, we didn't have to go through that.'"