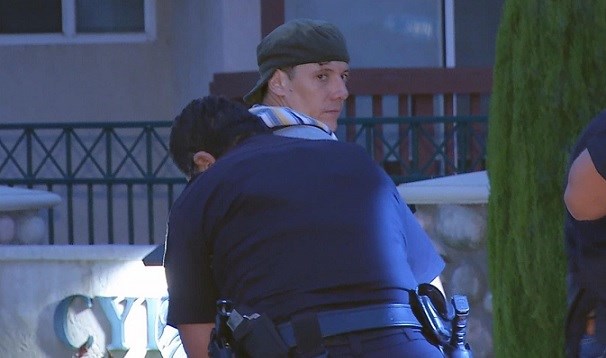 SAN DIEGO -- The mother of a man accused in a series of assaults leading to the deaths of three homeless men in San Diego says her son suffers from mental illness, reports CBS affiliate KFMB.

Police told reporters Friday that they have no doubt that 39-year-old Jon Guerrero is the man responsible for five attacks since July 3 that left three men dead. The victims -- all homeless men -- received serious upper-body injuries and two were set on fire.

Guerrero's mother, Kathleen, says her son suffers from mental illness and is not violent.

"I think they must have the wrong person. They have to, because that is not what he's like. He is not a violent person," she said. "He has always been kind, courteous and polite. He is not an aggressive person. And this just has stumped us."

But Guerrero has a history of criminal arrests, the San Diego Union-Tribune reports.

Guerrero's criminal cases in San Diego date from 1999 to 2009. He pleaded guilty in 2008 to burglary, grand theft and possession of marijuana and narcotics paraphernalia. Kathleen Guerrero wrote several letters asking the court to seek psychiatric treatment for him in jail, the paper reported.

She said that Guerrero didn't do well on probation because he had trouble following directions and keeping track of time and appointments.

In 2009, Guerrero was arrested again and pleaded guilty to robbery for repeatedly knocking down a homeless woman and stealing her bicycle. He then violated conditions of his probation and was ruled mentally incompetent and sent to Patton State Hospital.

His attorney at the time wrote that Guerrero hears "good" and "bad" voices when his medication wears off but on medication "can lead a normal, productive and crime free life," the Union-Tribune reported.

Guerrero, a Coronado native who most recently has lived in downtown San Diego, was booked into county jail on suspicion of three counts of murder, two counts of attempted murder and two counts of arson. He was being held without bail, with arraignment scheduled for Tuesday afternoon.

Guerrero was captured about an hour after the most recent assault happened Friday. Shortly after 4:30 a.m.., two San Diego Harbor Police officers heard someone yelling for help. They found a 55-year-old homeless man suffering from "significant trauma" to his upper body, the captain said.

Though badly injured, the victim, whose name has not been released, was expected to survive.

The suspect was arrested about three miles from the site of the assault, the fifth police have linked.