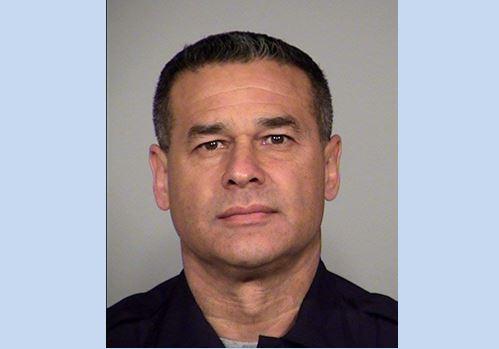 McManus said Sunday that the officer was sitting inside his car just outside police headquarters when he was shot and killed.

McManus said the officer had pulled someone over and was writing them a ticket when a black car pulled up behind the officer and stopped. Police believe the suspect’s vehicle was a black Toyota or Nissan sedan.

After the shooting, McManus said the driver then got back in his car, and escaped in part by driving through the police headquarters’ parking lot.

McManus said the suspect had not been apprehended Sunday night. He said he doesn’t believe the man has any relationship to the original motorist who was pulled over, and no motive has been identified.

“We consider this suspect to be extremely dangerous and a clear threat to law enforcement officers and the public,” McManus said.

The San Antonio Police Department posted a photo of a man on its Facebook page, saying “he might have information on the death” of Det. Benjamin Marconi. Police are asking for assistance in identifying the man shown wearing a hat and walking in the photo.

The shooting comes on the same day a man was fatally shot by San Antonio police after coming out of an apartment following a seven-hour standoff and pointing a gun at officers.

McManus said the man was fatally shot early Sunday following the standoff that began after the man’s ex-girlfriend called police when he apparently attempted to kidnap her.

Mayor Ivy Taylor released a statement regarding the officer, extending her deepest condolences to the family of the officer and the police force.

“This type of crime cannot and will not be tolerated. I ask for the community’s thoughtfulness and patience as the investigation continues and SAPD searches for the suspect,” she said.

McManus said the suspect is a black male around five-foot-seven to six feet in height, wearing a gray sweatshirt and black baggy pants. The suspect also has a beard, KENS reported.

Texas Gov. Greg Abbott called the slaying a “horrific act of violence.” Abbott said in a statement that “attacks against law enforcement officers will not be tolerated in Texas and must be met with swift justice.”

San Antonio Mayor Ivy Taylor extended condolences to the family of the slain officer and the entire police force.

Some streets downtown were blocked off with police tape as officials investigated the slaying.