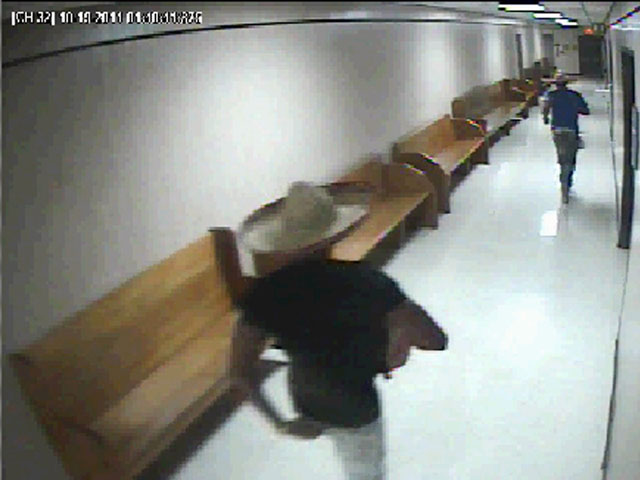 Officials said the men turned out to be harmless bar hoppers looking for kicks. They were caught after a silent alarm alerted authorities at about 1 a.m. that someone was using one of the historic building's fire escapes, reports CBS affiliate KENS.

Courthouse surveillance photos released by police show two men wearing sombreros running down a hallway around 1:30 a.m. A beer bottle was left in one courtroom, Bexar County Sheriff Amadeo Ortiz said, and the suspects playfully swung around a judge's gavel before getting caught.

"Evidently, they had been drinking prior to coming up here," Ortiz said. "It's very likely these individuals were just intoxicated."

All the men are in their 20s and are expected to be charged with burglary. Although their visas listed French addresses, authorities said they were not sure of their original nationalities. Ortiz said the men appeared to pose no security threat.

Earlier in the day, officials were not as clear as to the five's intentions.

Police had closed downtown streets and tactical units combed the building for explosives. Authorities also searched the nearby convention center where dozens of top U.S. intelligence officials were attending a conference, including Michael Vickers, the undersecretary of defense intelligence.

"Because they are foreign nationals, and because of everything that has happened in the United States recently, we can't take anything like this as a prank," Ortiz said. "We have to do our due diligence."

Also raising initial suspicion was the rented RV the men had been using to travel across the country. The group had been in the United States since Sept. 10 on 90-day tourist visas, visiting New York, Miami and traveling across the country in the RV, reports the station.

Authorities found photos in the RV of various landmarks, including courthouses and dams, federal sources said, but cautioned that they might be tourist materials.

Ortiz said they spoke little English but were being cooperative with investigators through the help of a translator.

"They were clowning around in the courtroom. They put on Mexican hats, they grabbed the gavel," Ortiz said.

"That gave us an indication they weren't up to anything other than a prank."