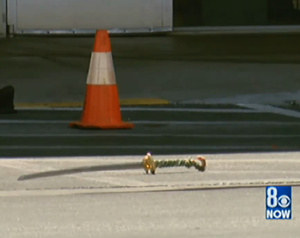 Detectives say the suspect, identified as 36-year-old Bongkuk Pak, was shot twice and was pronounced dead at a local hospital.

Authorities say the shooting appears to have been in self-defense but that detectives were investigating whether the gun used by the Dairy Queen worker was properly registered. The clerk has not been arrested.

They say only two employees and no customers were present at the time of the shooting.

CBS affiliate KLAS reported Monday that a female suspect has been arrested in the case.

Metro Police arrested 47-year-old Carol Matteo, who faces charges of robbery with a deadly weapon, and conspiracy to commit robbery and burglary.

According to KLAS,police say Matteo dropped off Pak for his unsuccessful, and ultimately, fatal, robbery attempt.
View CBS News In
CBS News App Open
Chrome Safari Continue
Be the first to know
Get browser notifications for breaking news, live events, and exclusive reporting.