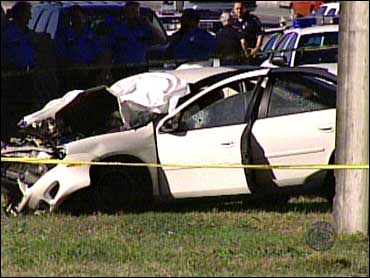 Looking to finish as the world's No. 1 player for a record sixth consecutive year, American Pete Sampras helped his own cause and saw second-ranked Marcelo Rios fall quietly Tuesday in round-robin play at the season-ending ATP Tour World Championships.

Sampras, battling Rios this week for the No. 1 ranking and a place in tennis history, broke Russia's Yevgeny Kafelnikov twice in each set of his 6-2, 6-4 victory.

Rios, who needed to win two of three round-robin matches to have chance at overtaking Sampras, faces an uphill climb after Britain's Tim Henman scored a 7-5, 6-1 triumph over the Chilean in a White Group encounter.

"It was just important for me to get off to a good start, and I did that," said Sampras, who lost his first round-robin match last year. "I definitely was very focused. I think everyone knows that this is an important week, and it showed. I hope I can maintain this level throughout the week, which is not going to be easy."

In a rematch of last year's final, Sampras broke the Russian's serve in the third and seventh games and closed out the first set in 25 minutes on a forehand volley.

Sampras immediately went up a break in the first game of the second set. The frustration continued for Kafelnikov when he was unable to capitalize on a break point in the fouth game, causing him to receive a warning for shouting an obscenity.

managed to break back in the sixth game when Sampras netted a forehand volley. But Sampras broke back in the next game and sealed the victory in the 10th game when Kafelnikov netted two consecutive backhands.

Sampras committed only 12 unforced errors as he improved to 10-2 lifetime against the Russian. Kafelnikov, the final player to qualify for the eight-man field, was plagued by 25 unforced errors.

"I want to finish on a high note in this tournament," said Kafelnikov. "All I can tell you is he (Sampras) will get through, and I think I also have a big chance to qualify. Perhaps we can play in the final. I'm not looking at anything but repeating the same success as last year."

The 27-year-old Sampras also hopes to join Ivan Lendl (1985-87) and Ilie Nastase (1971-73) as the only players to win the season-ending championships in three consecutive years.

Sampras is the only player to have qualified for the World Championship every year since 1990, advancing to at least the semifinals each time. In addition to titles in 1996-97, he also won this event in 1991 and '94.

Rios and Henman held serve until the 12th game of the first set, when Henman forced set point with a backhand slice that Rios hit into the net. On the next point, Rios lobbed a backhand that Henman chased down and returned, with the frustrated Chilean eventually hitting a terrible backhand wide.

The Chilean, as he has done so many times this year, seemed to lose his focus as Henman broke serve in the fourth and sixth games. Henman closed out the victory in just over an hour when Rios hit a forehand return long.

Rios led the ATP Tour with seven titles and reached his first Grand Slam final at the Australian Open. He has held the world's top ranking twice for a total of six weeks this year, dethroning Sampras with his victory at the Lipton Championships on March 30 and again in August.

The 22-year-old Chilean, who is tied with Andre Agassi on the ATP Tour in match victories with 68, has reached the quarterfinals or better in his last six events.

Sampras leads Rios by only 33 points in the ATP Rankings. If the two players meet in Sunday's final, the winner would claim the top spot for 1998. Not since 1995 has the No. 1 ranking been decided at the year-ending tournament.

Despite vying for the top ranking for most of the year, Sampras and Rios have not squared off on court since Sampras beat an 18-year-old Rios in the second round of the 994 French Open.

Henman won two titles and jumped into the Top 10 for the first time. The 24-year-old Englishman, who played in his first career Grand Slam semifinal at Wimbledon in July, went without a tournament victory until claiming the President's Cup at Tashkent, Uzbekistan, in September. Two weeks later, he defeated Agassi to capture the Swiss Indoors at Basel, Switzerland.

Moya, who stunned Sampras in the round robin last year en route to the semifinals, snapped a three-match losing streak and posted his first victory in six indoor matches this year.

In addition to winning his first Grand Slam championship in Paris in June, the 22-year-old Spaniard was a winner at the Super 9 event in Monte Carlo.

Kucera, making his debut in the season-ending event, is enjoying his best season on tour, reaching the Top 10 for the first time and notching a career-best 53 match victories. He reached his first Grand Slam semifinal at the Australian Open and won two titles.

On Wednesday, Sampras will face Moya and Kafelnikov will take on Kucera.

Sampras heads the Red Group and is joined by Moya, Kucera and Kafelnikov. Rios is joined in the White Group by Agassi, Alex Corretja and Henman.

Agassi, a winner of five titles this year, has been granted a Wednesday start after falling and straining his back in practice Monday.

Each player plays the three others in his group, with the winner of each group advancing to the semifinals along with the player with the second-best record.

An undefeated winner at the end of the tournament could earn $1.47 million.