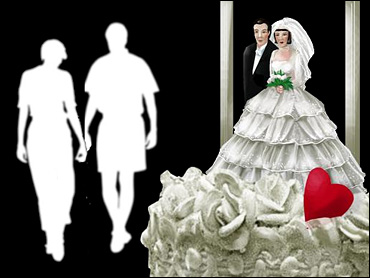 (CBS News) -- On Tuesday, voters casting ballots in North Carolina's Republican and Democratic primaries will also be able to weigh in on a controversial measure known as Amendment 1, which would define marriage as between one man and one woman in the state Constitution.

That's not all it does: The amendment states that "Marriage between one man and one woman is the only domestic legal union that shall be valid or recognized." That means that in addition to putting a ban on same-sex marriage in the North Carolina Constitution, the passage of Amendment 1 would ban civil unions or any other form of "domestic legal union" - for both gay and straight couples.

Opponents of the measure have been focusing in part on the impact it would have on straight North Carolina residents - as you can see in the ad at left, which suggests the measure would eliminate protections against domestic violence. The message is amplified in a recorded phone message from former President Bill Clinton beginning Monday in which he says "the real effect of the law will be to hurt families and drive away jobs."

Supporters have made a more straightforward appeal. As 93-year-old Rev. Billy Graham, who lives in Ashville, puts it: "Watching the moral decline of our country causes me great concern," he says in ads that appeared in state newspapers over the weekend. "I believe the home and marriage is the foundation of our society and must be protected."

They also argue that the Amendment - which would codify a state law already on the books banning same-sex marriage - would not have the wide-ranging impact that opponents claim. (TPM's Tom Kludt offers a good breakdown of that debate.)

Though opponents of the measure have reportedly outraised supporters, it looks likely to pass: Two recent polls in which the text of the measure was read directly to respondents (one by the conservative Civitas Institute, the other by the Democrat-aligned Public Policy Polling) show Amendment 1 passing by 16 and 14 points, respectively. (It's worth noting that PPP polling found one in ten voters thought the measure would legalize same sex marriage, not ban it.)

As Nate Silver of the New York Times lays out, polls have found that voters are more likely to oppose the measure if they believe its effects go beyond limits on same-sex unions - which explains why opponents are running ads like the one above. PPP and other pollsters have found that the state's voters would oppose the measure if they understood that it banned civil unions and domestic partnerships as well as same-sex marriage - and many don't. Opponents are hoping that their voter education efforts will allow them to pull off an upset and block the measure. Even if the measure is voted down, however, proponents could potentially reintroduce the amendment with a focus solely on gay marriage - and polls suggest it would pass easily. (That's exactly what happened in Arizona, where a measure banning gay marriage passed in 2008.)

If Amendment 1 does pass, it will provide fodder for arguments that American culture has become increasingly polarized, with conservatives and liberals living in separate worlds - not just ideologically but also geographically. Even as more and more blue states legalize same-sex marriage - Maryland became the eighth state (counting the District of Columbia) to do so in March - red states are holding firm or moving in the opposite direction. Indeed, the passage of Amendment 1 would mean that all 11 former Confederate states have a gay marriage ban written into its Constitution.