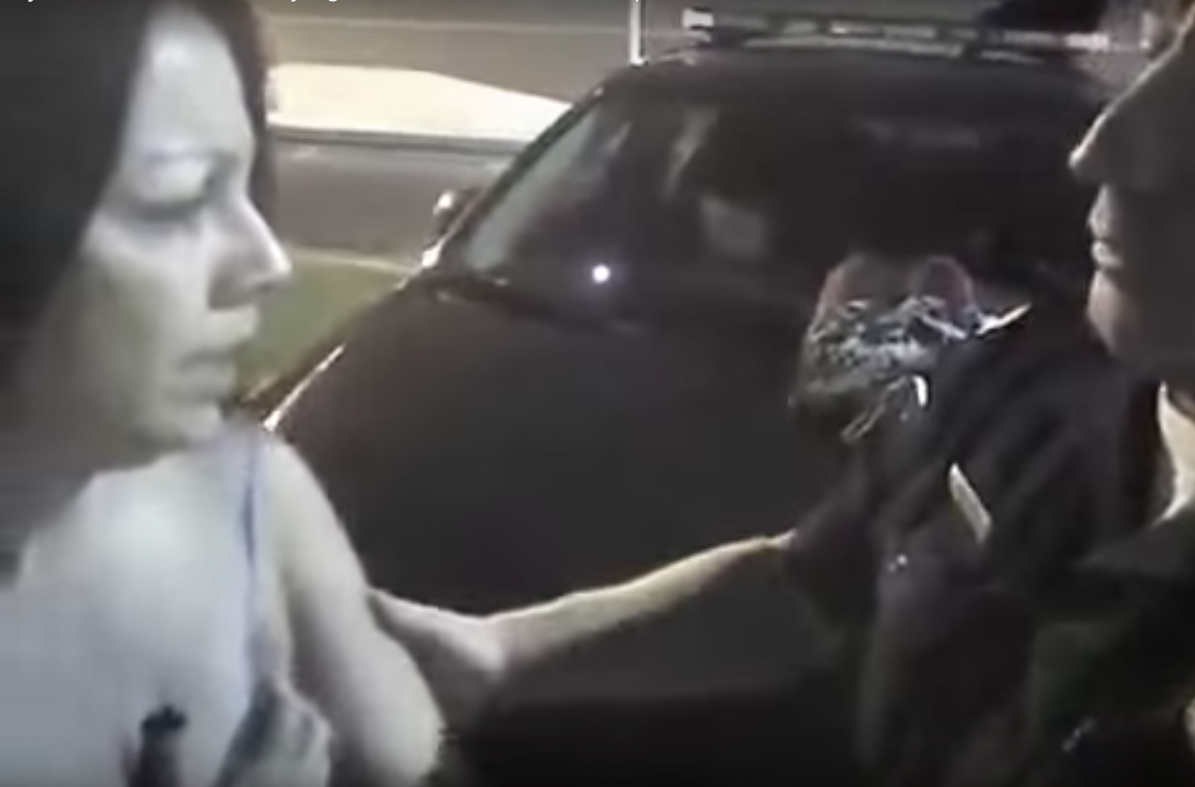 SALT LAKE CITY -- Authorities are considering criminal charges against a now-retired Salt Lake City police officer shown in a 2014 body camera video striking a woman in the face and yelling expletives at her while her young daughter watches during an arrest for public intoxication, CBS affiliate KUTV reported.

Police and prosecutors are also trying to pinpoint what went wrong internally that kept them from finding out sooner. The video was posted online this week by the woman's adult daughter, prompting news coverage.

Salt Lake Police Chief Mike Brown told reporters at a Wednesday news conference that he only learned about the incident on Tuesday, after the video was posted.

"It's a tragic situation in several ways," said Brown, according to KUTV. "The action you saw was abhorrent. It is not what we would teach it is not our culture. It did occur. That is our videotape, we do not back away from that, and I promise that we will take appropriate actions to look into this situation and investigate it through our internal affairs process."

Salt Lake County Attorney Sim Gill called the video "disturbing" and said his office is investigating whether charges should be filed.

Gill said the office he now oversees was aware of the video two years ago when their lawyers were handling the case against Michelle S. Anderson, but failed to let police know due to a "communication breakdown."

Michelle L. Diamond, a former city prosecutor who worked on the case, told The Associated Press that she was sickened by the video and asked her supervisors to let police know. She doesn't know what happened after that.

Diamond, now a private attorney, says the charges were dropped because the officer failed to show for the evidentiary hearing. Gill said the video also led to a decision to drop charges.

Tessa Hansen, an attorney with the Salt Lake Legal Defenders Association, said Anderson had what appeared to be a broken nose and damage to her teeth after the October 2014 incident. Hansen, who represented Anderson, said her office thought police were reviewing the incident.

"The video was pretty sickening and it's something I'll never forget," Hansen said. "It's a good reminder of how things aren't supposed to be done."

Anderson, now 43, was being arrested during the video for public intoxication after officers went to her home for a second time the night of Oct. 13, 2014, according to charging documents.

The first time, neighbors called after hearing screaming and crying inside the Anderson residence. Her 9-year-old daughter told police that her mother had called her expletive-laced names and said she didn't want to stay with her. Arrangements were made for another family member to get the girl, and police left.

The second time police came after a neighbor said Anderson was drinking too much and trying to fight a neighbor.

The video, posted on YouTube by Anderson's 22-year-old daughter, Jasmine Anderson, shows Michelle S. Anderson being calmly handcuffed by a police car while her young daughter watches. When she asks why she's being arrested, the officer tells her, "Remember the warning I gave you? That if you came out and harassed them."

The calm in the video is broken when the officer suddenly spins around and strikes the woman in the face. It's not clear if it was a punch or done with an open hand.

"Oh my God," she says, crying and lying face down. "You spit on me," the officer says, followed by a series of expletives and later, "You're an idiot." With her daughter wailing in the background, Anderson says, "Please stop, I can't breathe," with her face in the grass, her arms handcuffed.

"Shut your hole," the officer says. "When you go spitting on somebody, you deserve to have your (expletive) kicked. You lose all respect."

The spit can't be seen in the footage. The officer tells his partner in the video that Anderson "splattered all over the back of me."

On her personal Facebook page, Jasmine Anderson encouraged her friends not to give in to the impulse to hate the police officers involved, but rather focus their energies "on finding the corrupt and power hungry" and removing them "from their place of power."

"I cannot put into words the horror I felt seeing that video," she wrote.

Brown said he has not yet talked with the officers involved and isn't releasing their names. The officer seen striking the woman has since retired, Brown said. The other still works for the agency and remains on duty pending the investigation, he said.

Brown said he's troubled that that it took two years to come to light, considering sergeants are supposed to review every arrest made by the agency.

He plans to evaluate how the agency reviews arrests and body camera videos. Most patrol officers wear body cameras, leading to massive amounts of footage. Brown said there's more body camera video of the incident, but said nothing noteworthy happens besides what's seen in the YouTube click.

"The review process failed us that night," Brown said. "Why are dealing with this now?"