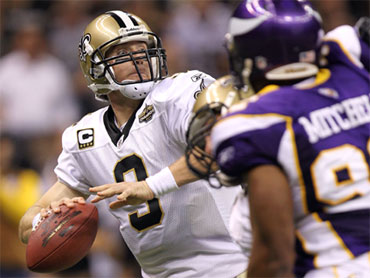 For football fans in the Big Easy, "Lombardi Gras" just keeps on rolling.

Drew Brees and the Saints extended New Orleans' post-Super Bowl euphoria for at least another week and denied Brett Favre a victory in the Louisiana Superdome one more time.

Brees completed 27 of 36 passes for 237 yards and one touchdown, and the Saints survived a hard-fought season opener for a 14-9 victory over the Minnesota Vikings on Thursday night.

It wasn't the most spectacular way to open a title defense, considering it was a rematch of the riveting 2009 NFC title game last January, which the Saints won in overtime to advance to their first Super Bowl.

It was the lowest-scoring victory of the Sean Payton era, which began in 2006, but the Saints will take it, especially after their defense limited Favre to 171 yards passing and one touchdown.

"I know people are going to say it wasn't the fireworks they expected it to be," Favre said.

Although his offense was far less potent than usual, Payton said he "was proud of the way we came through and made enough plays to start the season 1-0."

Unlike the NFC championship game, the Vikings didn't lose a fumble and turned the ball over only once on Jonathan Vilma's interception of Favre, who made an ill-advised throw as Roman Harper hit him on a safety blitz.

Also unlike their previous meeting, the Saints had most of the statistical advantages, outgaining Minnesota 308 yards to 253 and controlling the ball for 33:43, compared to 26:17 for Minnesota.

"We knew we would have to play better in a lot of areas than we did last year (against the Vikings) and I felt like we did," Brees said. "We just showed that we can win in a lot of different ways."

New Orleans might have won the game more easily if not for two missed field goals by Garrett Hartley, who kicked the dramatic winning field goal last year.

Still, New Orleans was able to kneel on the ball to run out most of the last two minutes after Pierre Thomas capped a 71-yard, one-touchdown performance with 10-yard, first-down run right after the 2-minute warning.

Vikings running back Adrian Peterson, who rushed for 122 yards and three TDs in the last meeting, rushed for 87 yards on 19 carries against New Orleans' stingy defense.

"We did a very good job of holding against the run and still taking some of the downfield throws away," Payton said.

Although the game was competitive, it hardly lived up to its hype.

Favre's comeback from ankle surgery, marking the start of his 20th season, was largely unspectacular. Despite being sacked only once and hit not nearly as often, or as hard, as in the NFC title game, he looked out of synch or inaccurate at times. The fact that Minnesota was without star receiver Sidney Rice may have had something to do with that.

Favre's best sequence came on Minnesota's only touchdown drive late in the first half, when he found Vinsanthe Shiancoe on precision down-the-middle completions of 33 and 20 yards, the second for the Vikings' only TD.

That gave Minnesota a 9-7 halftime lead, which the Saints erased on their first drive of the second half.

"We were right where we wanted to be at halftime, then it was three-and-out, three-and-out," Vikings coach Brad Childress said. "There were not a lot of throws to be made downfield. They were going to hold us down and make us bleed slowly."

The Saints' triumph ended a long day of festivities which for some might have been more exciting than the game itself.

Tailgaters were setting up around the Superdome at dawn, and one pregame cookout even doubled as a wedding. Some government offices, business and schools shut down.

NFL-sponsored pregame festivities included a concert in the French Quarter featuring Dave Matthews and Taylor Swift, along with a Mardi Gras-style parade, for which police estimated the crowd at about 200,000.

Shortly before kickoff, singer and New Orleans native Harry Connick Jr. entered the Superdome on a parade float with a giant replica of the silver Vince Lombardi Trophy. Also on the float was Saints owner Tom Benson, holding the real trophy.

As Connick finished the first verse of, "When the Saints Go Marching In," a black championship banner was unfurled from the roof of the dome and Saints players streamed out of the tunnel to sustained and boisterous applause.

Shortly before kickoff, Brees stood on the 30-yard line, holding a fist up high before pumping his arm down in an orchestrated move to send the sellout crowd of 70,051 into a chants of: "Who dat say dey gonna' beat dem Saints!"

Soon after, the Saints received the opening kickoff and scored on only five plays, with Brees hitting three of his first four passes for 69 yards, including a 29-yard scoring strike to Devery Henderson on a rollout.

The Saints quickly regained their stride on their first drive of the second half, going 74 yards in 11 plays, capped by Thomas' 1-yard TD plunge up the middle. That turned out that was all the scoring the Saints needed.

NOTES: The defending Super Bowl champion has played host to the last seven Thursday night openers and won them all. ... The previous lowest-scoring Saints victory under Payton was his debut as a head coach in the 2006 regular season, a 19-14 win at Cleveland. ... Brees, who completed 75 percent of his passes without an interception, had a quarterback rating of 101.3, the 30th time in 64 regular season games with the Saints that is rating was above 100. ... Favre was 15 of 27 (56 percent) with one interception for a passer rating of 71.7. ... Favre needs two more TDs passing to become the first NFL quarterback with 500. ... Shianco finished with four catches for 76 yards, all in the first half. ... Thomas rushed for all but 1 of his yards in the second half.