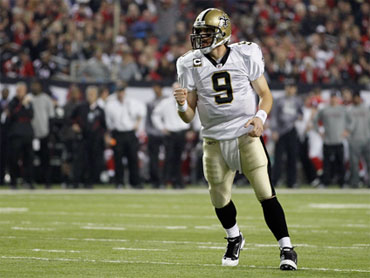 ATLANTA - Drew Brees and the New Orleans Saints showed the high-flying Atlanta Falcons they're not ready to give up their crown just yet.

That's right, Who Dat going back to the playoffs: The reigning Super Bowl champs.

Facing a team that had won eight in a row and was poised to lock up the division title and home-field advantage in the NFC playoffs, New Orleans rallied for a 17-14 victory over the Falcons Monday night to clinched a return to the postseason.

Atlanta (12-3) couldn't take advantage of the national stage to silence all those skeptics who wondered if the team with the NFC's best record is really its best team.

Despite throwing a pair of costly fourth-quarter interceptions, Brees through when it counted. The reigning Super Bowl MVP led a 90-yard drive that ended with a 6-yard touchdown pass to rookie Jimmy Graham with 3:24 remaining. The Saints (11-4) sent a clear message to a team they might see again in January.

"It feels good," Brees said. "You just want to punch your ticket to the big show, and we've done that. Obviously Carolina needs to beat Atlanta next week so we can get that one seed."
The Saints proved that Atlanta is not invincible, even playing at the Georgia Dome, where the Falcons had a 19-3 record in Mike Smith's three years as coach.

"We don't want to feel this way the rest of the season," said Matt Ryan, who lost at home for only the second time as the Falcons' starting quarterback. "We're going to work hard to make sure we don't."

The loss doesn't ruin Atlanta's two main goals. The Falcons can still wrap up their first division crown since 2004 and home field through the NFC playoffs by knocking off two-win Carolina at home in the final week of the season.

But this one stung.

Brees completed six straight passes on a 13-play drive that won it, making up for an ill-advised attempt to flip a backhanded pass to escape heavy pressure. The throw was picked off by Chauncey Davis and returned 26 yards for a touchdown in the opening minute of the fourth giving the Falcons their first lead all night.

It didn't last, even after Brees was picked off again on a brilliant play by defensive end John Abraham, who batted the ball high in the air then grabbed it himself.

"That's part of it," Brees said. "It's the ebb and flow of the game. Sometimes you have a clean pocket. Sometimes they're getting after you.

After Abraham's interception, the Saints held the Falcons just past midfield, then got the ball back at their own 10. The first two plays lost a yard, but Brees connected with Lance Moore on an 18-yard pass to keep the drive going.

Brees kept on completing passes, five more in a row to lead the Saints down the field. On third-and-3 at the 6, he flicked a quick pass to Graham slanting over the middle.

The rookie got a step on William Moore and Brees delivered the ball just out of the reach of Sean Weatherspoon for the touchdown.

Graham, who also played basketball at Miami, dunked it over the goalposts to celebrate.

New Orleans especially enjoyed getting the best of White, who stirred up hard feelings last week with a series of inflammatory tweets, including one that referred to Hurricane Katrina.

"We didn't execute. We didn't do anything we needed to do," White said. "Our defense played well. They got those turnovers. They got us good field position, and we just didn't get the job done."

Even though Brees made two huge mistakes, the Falcons were lamenting all the times he got away with a dip here, a step there.

"We can't keep getting close," Abraham said. "It's not enough, especially with a guy like (Brees). He's not going to just go down. If you get close like that, he's still looking at his receivers. He's third-and-short, he's third-and-long, we've got him right where we want him and he's completing passes for first down."

All around, the Falcons didn't play their typically clean game.

An errant snap by Todd McClure out of the shotgun was recovered by New Orleans, setting up Thomas' 2-yard touchdown run that gave the Saints a 10-0 lead and breaking Atlanta's streak of seven straight games without a fumble.

Ryan connected with Roddy White on a 7-yard touchdown pass that made it 10-7 at halftime, but Atlanta squandered another chance when Michael Turner fumbled the ball away on second-and-goal at the New Orleans 1. It was Turner's first fumble of the season.

Brees completed 35 of 49 for 302 yards, easily winning the duel with Ryan (15 of 29 for 148 yards) on a night when both teams struggled to run the ball effectively.

But Brees left the door open for the Falcons twice.

Trying to avoid a sack, he got away with a flip back to Thomas in the third quarter. The move backfired when Brees tried it again in the fourth.

With Jonathan Babineaux bearing down on him, Brees attempted to backhand a pass to a receiver standing at least 15 yards away. Bad move. The ball fluttered right into the arms of the 271-pound Davis, who rumbled the other way for his first career touchdown with 14:14 remaining.

After the ensuing kickoff, Brees drove the Saints right down the field, appearing to put them ahead with a 25-yard strike over the middle to Marques Colston. But the play had been whistled dead because of a false start by Jermon Bushrod, wiping out the score.

Then, on the very next play, Brees made another huge mistake. Or, it might be more appropriate to say, Abraham pulled off a tremendous play.

The 32-year-old defensive end rushed in on Brees untouched and swatted the ball up in the air when the quarterback tried to hurriedly throw it away. It came down right in Abraham's arms for his first career interception.

Despite the miscues, the Saints were the ones celebrating at the end. A few of them even trotted back on the field after it was over, whopping it up and posing for pictures on the Falcons logo at midfield.

"We've got to take a long look at ourselves," Abraham said.