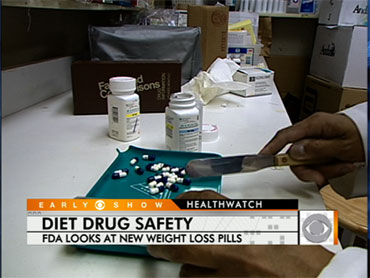 Food and Drug Administration (FDA) advisors are meeting today to discuss the approval of a new diet drug called Lorcaserin.

Late yesterday, the panel delivered a split opinion on whether to pull the diet drug Meridia off the market due to evidence that it increases heart attack and stroke.

"First of all, Harry, when you talk about a weight loss medication, the first rule in medicine always is 'do no harm.'"

Ashton pointed out that given the number of people who are obese in this country, there is already a population at risk for heart disease, stroke, among others.

"So, when you look at a drug like Meridia, the question then becomes, risk versus benefit," she said.

"And so a recent study published in the New England Journal of Medicine, actually found that patients who took the drug lost an average of 8.8 pounds, which is modest, to say the least. Remember, we are talking about people who may have fifty pounds or more to lose and they concerningly found a 16 percent increased risk for heart attack, stroke and death, even in young people."

Ashton stressed again -- that's what the panel is looking at -- do the benefits outweigh the risk.

Is there any indication which way they will go?

"Again, as you say the vote was split, actually eight voted against it and eight voted it should stay on the market. It's very difficult to pull a drug from the market once it's already been approved," she explained.

What are the other diet drugs in the FDA line-up?

"There are three in the pipeline. We heard about them months ago, the first is called Lorcaserin -- and they are going to be looking at again their safety and efficacy. Qnexa, they already voted to reject it. Lorcaserin, the panel will decide today and FDA will decide later. The last is called Contrave. The decision for that will be made in December."

Considering obesity is an epidemic in this country, these findings and decisions are crucial.

Ashton said, "We know there is no quick fix; there's no magic bullet. Again, this is not for people who want to lose five or ten pounds, but for the morbidly obese, whose lives are put at risk because of their obesity. Again, you have to consider everything, surgery, medication, diet, exercise, all of those factors come into play."