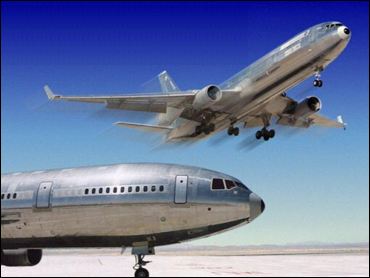 President Bush sought to coax Americans back onto airplanes Thursday by putting the federal government in charge of airport security and pledging $500 million to upgrade security features on airplanes in hopes of thwarting future hijackings.

"Get on the airlines, get about the business of America," Mr. Bush told hundreds of flag-waving airline workers at Chicago's O'Hare International Airport. Two jets were parked nose-to-nose at the event - one each from United Airlines and American Airlines, the carriers hijacked two weeks ago. The attacks left nearly 7,000 dead or missing.

President Bush found a message in the two corporate logos: "America is united!" he said. "We are united in bringing justice to those folks who did the evil deed on Sept. 11." As he spoke, departing jets roared overhead.

Terrorists hijacked four airplanes Sept. 11, crashing two into the World Trade Center in New York and one into the Pentagon outside Washington. A fourth crashed in Pennsylvania, apparently after passengers struggled with the hijackers. U.S. air travel has dropped sharply since the attacks.