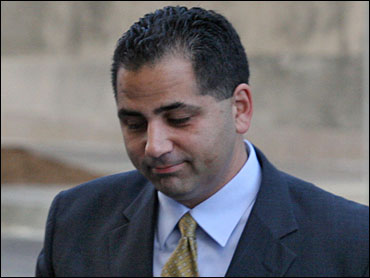 
The Justice Department scored the first trial conviction today in its wide-ranging probe into the corruption of Congress by Republican uber-lobbyist Jack Abramoff. Who got convicted? David Safavian.

Don't worry if you've never heard of the man. A lot of people inside the Beltway don't know who he is. He was indicted while he worked at the Office of Management and the Budget. But it was his job as chief of staff at the General Services Agency (GSA), the government agency that controls all of its real estate, that got him in trouble. Before his government service, Safavian was a crony of Jack Abramoff.

During the trial, Safavian described Abramoff as a "mentor" and said he had a "real fondness" for him. But Abramoff tried to use Safavian to purchase or secure leases on two pieces of government property that he wanted to turn into profitable private developments.

The government laid out a case that Safavian set up meetings between Abramoff and top GSA officials to get access to government property on which Abramoff wanted to build a private school. And prosecutors said Safavian was giving Abramoff inside information to help Abramoff get ahead of other bidders on properties like "the crown jewel of the GSA," the Old Post Office building on Pennsylvania Avenue, where he wanted to develop a hotel.

Safavian was convicted of lying to investigators and obstruction of justice. He really got into trouble over a trip to Scotland and the fabled birthplace of golf, St. Andrews. The trip was planned by Abramoff to include Ohio Congressman Bob Ney, then Chairman of the powerful House Administration Committee that overseas GSA, and in a position to help Abramoff get his government property leases. Safavian was convicted of lying about the trip to government ethics officers and later to congressional investigators.

David Safavian may seem like a small fish, but to government prosecutors his conviction proves that Jack Abramoff has the goods on many people and can deliver. In addition to today's conviction, the government has turned four other Abramoff associates as they close in on their investigation.

The Safavian trial offered a first hand account of how Abramoff operated as he manipulated and corrupted the system to his own ends. The prosecution said Abramoff offered Safavian currency — the golf trip, tickets to high priced sporting and entertainment venues, meals, scotch and cigars.

The government's star witness was Neil Volz, who worked for Congressman Ney before he joined Abramoff. Volz pled guilty to corruption charges brought by the government and is cooperating in the Abramoff investigation.

Volz described his job to the jury this way: "I brought my rolodex of the people I knew, my know-how of how to get things done. … On the Old Post Office project, I was trying to break the rules on contracting so clients could get a leg up on the competition."

Safavian and Ney went on the Scotland golf trip. The lobbyists, Volz and Abramoff, called their powerful friends "champions" — officials who could deliver on their pet requests. Like Congressman Ney, whom they asked to insert language into federal legislation allowing Abramoff to get access to the Old Post Office.

Actually, prosecutors didn't think so. They estimated the trip cost a lot more. Hotel rooms in Scotland were $1,600 a person, Golf cost between $1,200 and $2,400, not including tips for caddies. When you add up all the fees, the private chartered jet and a side trip to London after golfing, the cost was more like $10,000 for Ney.

As for Safavian, he tried to say Abramoff told him he owed just $3,100, and claimed he got a permission slip from the government to fly free on a chartered jet. But the prosecution said a trip like the one he went on would have cost $17,000.

One source close to the investigation tells CBS News to expect "more shoes to drop" in the very near future. And after today's verdict, sources tell CBS the man most at risk right now is Ney, a Republican.

Ney's office, however, maintains that "this case had absolutely nothing to do with Ney. The congressman has said consistently from day one that he has never, at any point, engaged in any improper, unethical or illegal activity."

Safavian, sources say, was actually offered a deal without jail time, but turned it down. And now that he has lost in court, other Abramoff associates could decide to cut deal or face the same fate.

By Deirdre Hester and Ward Sloane