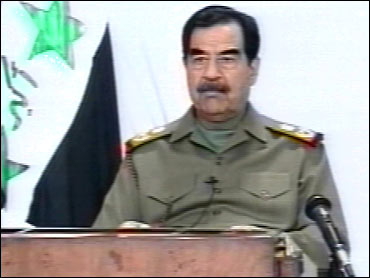 A bunker under Saddam Hussein's presidential palace was built to be nuclear-proof and is likely to withstand conventional bombing, a man who says he helped design it said Sunday.

"I don't believe that the bombs the Americans have will be enough," said Karl Esser, who told The Associated Press he was a consultant to a German-led group of companies that built the Iraqi leader's shelter in the early 1980s.

The bunker was designed to withstand a nuclear blast 650 feet away as powerful as the bomb at Hiroshima, and temperatures of more than 570 degrees Fahrenheit, Esser said in a telephone interview.

"It's very, very difficult to crack unless you hit it directly with a small atomic bomb," he said. "Normally such bunkers can only be taken by ground troops."

Esser said he planned the bulk of the shelter, organized the delivery of technical equipment and made sure the bunker met Western military standards. It cost about $60 million, he said.

Esser said he met Saddam in the spring of 1984 when he was invited to Baghdad around the time the bunker was completed to brief Iraqi officials on its operation. Saddam was in civilian clothes and appeared "quite unspectacular," Esser said.

"He asked me questions and I answered them matter-of-factly," he said. "You did notice that he had charisma. When he spoke, everyone else went quiet."

Esser, 45, said he worked for years helping design secure shelters for civil defense authorities in Munich. He was approached by a local company in the early '80s to help with the Iraqi project. The company in question was the now extinct Vereinigte Werkstaetten, which was subcontracted by Boswau & Knauer.

Civil defense work dried up after the end of the Cold War, said Esser, who lives in a Munich suburb. He refused to talk about his current job.

The German role in the bunker under Saddam's palace near the Tigris river also surfaced during the 1991 Gulf War.

Boswau & Knauer was the main company involved, and became part of German construction giant Walter Bau AG after a series of mergers in the 1980s.