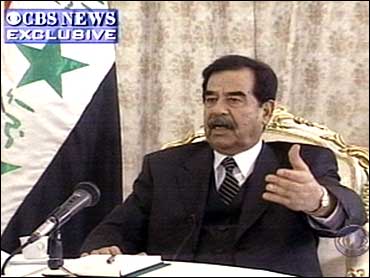 In an exclusive interview with CBS News Anchor Dan Rather, Iraqi President Saddam Hussein insists the American people are not his enemy and urges dialogue, including a debate with President Bush, to avoid war.

Saddam also denies his Al Samoud 2 missiles are in violation of U.N. mandates and indicates he will not destroy them, as chief U.N. weapons inspector Hans Blix has demanded.

The wide-ranging three-hour interview, Saddam's first with an American journalist in a decade, covered the Iraqi leader's feelings on his own people, the American public, Osama bin Laden, and what his own fate might be. He spoke at length on the key issue of the Al Samoud 2 missiles.

Additional excerpts of the interview will air Wednesday on The Early Show and on a special edition of 60 Minutes II on Wednesday night at 9 pm ET, 8 pm CT.

Rather: Mr. President, do you intend to destroy the Al Samoud missiles that the United Nations prohibits? Will you destroy those missiles?

Rather: What is the most important thing you want the American people to understand at this important juncture of history?

The White House flatly rules out any kind of debate with Saddam Hussein. As for the Al Samoud 2 missiles, chief U.N. weapons inspector Hans Blix insists that Iraq has them and must destroy them.

Note: The interview was taped by Iraqi TV crews, as is standard practice for Hussein, and the Iraqis delivered a tape that combined all three cameras into one composite feed. However, as far as we can determine, the content of the interview is intact. The Iraqis assured us beforehand that there would be no censorship whatsoever of the interview, which ran for almost three hours, and they have apparently lived up to that assurance. We will continue to check the transcript against our own notes, and if that changes, we will of course let you know.