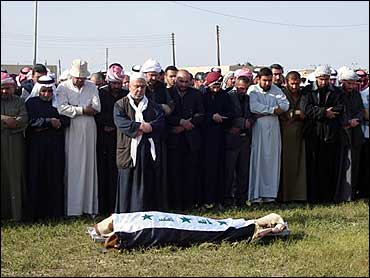 Hundreds of chanting mourners buried Saddam Hussein's former vice president near the ousted dictator, his sons and two other executed deputies Tuesday in a spot that has become the graveyard of the ousted regime.

Taha Yassin Ramadan's body, which was covered with the Iraqi flag, was interred in a building courtyard in the Tigris River village of Ouja hours after he was hanged for his part in the killings of 148 Shiite Muslims following a 1982 assassination attempt on Hussein.

Police, meanwhile, found the bullet-riddled bodies of 32 men scattered across Baghdad. The corpses showed signs of torture and were the apparent victims of sectarian death squads, most of which are believed to be operated by Shiite militias.

That number was below the average of 50 bodies that were turning up daily on the capital's streets before the U.S.-Iraqi security operation started Feb. 14. Militia fighters have been lying low to avoid a confrontation with American troops.

The number of execution-style deaths was notable, however, because the toll had fallen to as low as seven a day, prompting American and Iraqi officials to express cautious optimism that sectarian violence was ebbing. Three bodies were found in the northern city of Mosul as well.

Yahya Ibrahim, a Sunni Arab cleric and member of the Association of Muslim Scholars, said Ramadan had asked in his will to be buried at the site, which has become a focal point for loyalists of the former regime.

Ouja, just outside Tikrit and about a 90-minute drive north of Baghdad, is near where Saddam was captured by American soldiers in December 2003.

Reaction to Ramadan's execution was muted compared with Sunni outrage that erupted after a clandestine video showed Saddam being taunted on the gallows before he was hanged Dec. 30 for his role in the killings and when Ibrahim was inadvertently decapitated at his later execution.

"We ran test runs using a dummy and they were successful," he told The Associated Press. "We marked the rope at several points to show the maximum weight allowed. Iraqis have been trained by the experts. All this was done at the request of the prime minister."

Ramadan, who was nearly 70, was weighed before the hanging and the rope was chosen accordingly, al-Husseini said.

The execution closed the legal books on the 1982 killings of 148 adults and children from Dujail, a town 50 miles north of Baghdad. Besides the four men executed, three other defendants were sentenced to 15 years in jail. One was acquitted.

U.S. Embassy spokesman Lou Fintor said the execution was an Iraqi decision but stressed "the trial has by most accounts met the basic standards of international justice."

Dozens of other Saddam-era officials remain jailed for other alleged crimes.

Among them is Saddam's cousin Ali Hassan al-Majid, who is among six defendants on trial charged with war crimes and crimes against humanity for a military crackdown in which more than 100,000 Iraqi Kurds were killed. Al-Majid is known as "Chemical Ali" for allegedly ordering poison gas attacks during the campaign.

In southern Iraq, Iraqi forces replaced British troops at a frequently targeted base inside the city of Basra.

The British commander, Maj. Gen. Jonathan Shaw, said the move was part of the plan to shift most security responsibilities to the Iraqis. He said his soldiers would now enter the streets of the oil port city only in exceptional circumstances.

Prime Minister Tony Blair said last month that Britain will cut reduce its force in Iraq from 7,100 to 5,500 in the coming months. Some 125 British personnel have died in Iraq since the U.S.-led invasion.