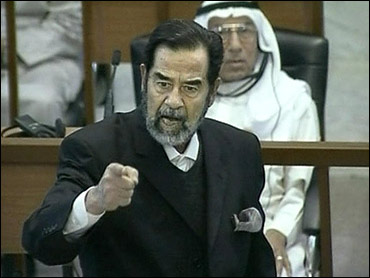 Saddam Hussein's lawyers walked out of his trial hearing Wednesday to protest against the changing of the chief judge and the deposed leader was ordered to leave the courtroom.

Mohammed Oreibi al-Khalifa, a Shiite Muslim Arab, was presiding Wednesday in place of Abdullah al-Amiri, who was removed after he was accused of being too soft on the former Iraqi leader.

But when the session began with al-Khalifa in charge, the defense lawyers questioned the impartiality of the trial.

"We don't expect from this court established under the occupation authorities to be fair, so we decided to withdraw from this trial," defense lawyer Wadoud Fawzi told the court, reading a statement on behalf of the defense team.

"The decision to sack the judge at the orders of the government shows that this trial lacks the standards of a fair trial," added Fawzi.

Al-Khalifa responded, saying replacing the chief judge was an "administrative matter." When the lawyers protested, the judge said the court would appoint new counsel.

Saddam said he wanted his lawyers to stay and protested against court-appointed counsel. "This is our personal right," Saddam shouted about the defense choosing its counsel as he pointed his finger at the judge and pounded his fist on the podium. "You must deal with us as the law dictates," he said.

Al-Khalifa asked him to stop talking, but Saddam refused, prompting the judge to order him out of the courtroom.