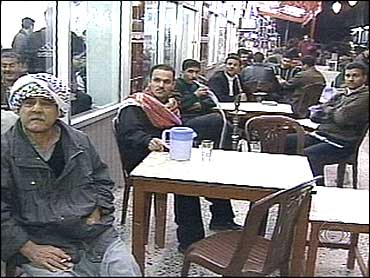 As CBS News Correspondent Mark Phillips reports, there was no choice whether to watch it as it was broadcast on all Iraqi four channels. For the residents of Iraq, though, it was a novel experience.

According to most Iraqis, Saddam is never seen by them to be asked direct questions. But there was little doubt expressed about how their president did. Their reaction is even stronger on what they think of the White House rejection of Saddam's challenge to President Bush for a televised debate.

"I think he is a coward. That's all," says Quasem Aziz Habib, a university student.

The interview also drew controversy at the White House. The Bush administration had sought to have a senior official rebut Saddam's statements in the interview on 60 Minutes II, but no agreement could be made in time with the network.

CBS News had said it would accept Mr. Bush, Vice President Dick Cheney or Secretary of State Colin Powell on the show, but the White House only offered officials the network deemed inappropriate for the broadcast.


The 60 Minutes II Interview
In his first interview with an American reporter in more than a decade, Saddam Hussein remained defiant, even though his country is surrounded by one of the most lethal fighting forces ever assembled. Defiant - even in the face of an impending war that seems certain to end his rule and, quite possibly, his life.

Dan Rather met him on Monday, in the oldest and largest presidential palace, at a time when the U.N. arms inspectors have accused him of having prohibited missiles. And at a moment when President Bush has said time has run out, that the only thing Saddam can do to prevent war is to disarm immediately. Anything short of that, the president says, is a game.

At this moment, the chief weapons inspector Hans Blix is preparing what could be his final report to the U.N. In a matter of weeks, with or without international support, the American and British forces could begin an all-out assault on Baghdad.

Rather: Mr. President, do you expect to be attacked by an American-led invasion?

Translator for Saddam Hussein: We hope that the attack will not take place. But we are bracing ourselves to meet such an attack. To face it. You've been here for a few days, you see how people live. They live normally, they get married, they visit each other, but at the same time they hear the news. The officials in America keep talking about attacking Iraq. And it's normal that the people prepare themselves for such a possibility. At the same time they are praying to Allah to stop the Americans from going through with it and to spare the Iraqis from the harm that those on the bandwagon of evil want to inflict upon them.

Rather: Are you afraid of being killed or captured?

Translator for Saddam Hussein: Whatever Allah decides, we are believers. We believe in what he decides. There is no value for any life, without faith. When we were young, ordinary people in Iraq, before, the Iraqi people had suffered a lot of deprivation and backwardness. We decided to place ourselves to the service of our people. Bear with me. My answers are long.

Rather: Mr. President, I have all night.

Translator for Saddam Hussein: We did not ask the question whether we were going to live or die. It's morally unacceptable to ask such a question. Nothing is going to change the will of God. The believer still believes that what God decides is acceptable.

Narration: But we reminded President Hussein that he has more earthly concerns –- more than missiles that U.N. inspectors say have a longer range than permitted threatening Iraq's neighbors and capable of attacking American troops in Kuwait.

Rather: Mr. President -- do you intend to destroy the Al Samoud missiles that the United Nations prohibits? Will you destroy those missiles?

Rather: I want to make sure that I understand, Mr. President. So, you do not intend to destroy these missiles?

Translator for Saddam Hussein:
Which missiles are you talking about? We do not have missiles that go beyond the prescribed ranges, by the U.N.

Rather: I mean, the missiles that Hans Blix says that he wants a commitment from you that they will be destroyed.

Translator for Saddam Hussein: No violation has been made by Iraq to anything decided by the United Nations. If the intention is to rewrite those resolutions, then we will be entering a new framework. A framework in which the United States will be made to forsake its own position and take a new road towards harming Iraq.

In the interview, Saddam Hussein gave no indication he will capitulate to an ultimatum from Chief Weapons inspector Blix -- to begin destroying the missiles by this weekend. Indeed he hinted he will not. Saddam also rejected Bush Administration allegations that besides the missiles delivery system he still has weapons of mass destruction.

Translator for Saddam Hussein: I think America and the United States and the world also knows that Iraq no longer has the weapons. And I believe the mobilization that's been done was in fact done partly to cover the huge lie that was being waged against Iraq, about chemical, biological, and nuclear weapons. That is why, when you talk about such missiles, these missiles have been destroyed. There are no missiles that are contrary to the prescription of the United Nations in Iraq. They are no longer there.

Narration: The Bush Administration says Saddam Hussein is just trying to fool the world one more time about his missiles and his weapons of mass destruction. And he faces a new U.N. resolution accusing him of failing to prove he has disarmed. A resolution which, if passed, would in effect authorize war.

Rather: Will the new proposed United Nations resolution, the one that's just out this week -- will this make any difference at all in your position?

Translator for Saddam Hussein: The basic position, there is no change. We have not pursued any weapons of mass destruction. So, what do they want to issue new resolutions about now?

Rather: So basically, no change in your position.

Translator for Saddam Hussein: The basic stand of our position is clear. We do not compromise our independence or our dignity or our freedom. At the same time we will continue to commit ourselves to what has been decided by the United Nations. If the new resolutions infringe upon our dignity then our position towards such a resolution will be in line with our previous positions.

Rather: Mr. President, have you been offered asylum anywhere? And would you, under any circumstances, consider going into exile, to save your people death and destruction?

Translator for Saddam Hussein: I was born here in Iraq and I was born as a genuine believer. I am proud to have been born fearing God, and I have taught my children the value of history and the extreme importance of iman, of our heritage, that we must maintain the honor of nationalism, and pan-Arabism. The importance of that is essential to the nation and to the Arab nation.

And now, I am also teaching this to my grandchildren. And-- I have always talked to the Iraqi people in this sense, since the days of our underground-- freedom-fighting. We do not change our position. Our position is basic. We have been born in Iraq. This is part of a glorious nation. A great Arab nation. And we have lived here. That is why, talking about asylum, whoever decides to forsake his nation is not true to the principles. We will die here in Iraq. We will die in this country and we will maintain our honor. The honor that is-- required of our people. I believe that whoever asks Saddam to-- or, offers Saddam asylum in his own country, is in fact a person without morals because he will be directing an insult to the Iraqi people. The Iraqi people who have chosen Saddam Hussein, unanimously, to continue to lead the people of Iraq

Narration: The Iraqi President told us that the first Bush administration threatened it would bomb Iraq back to a pre-industrial age and then attacked his country with thousands of warplanes and helicopters and missiles.

Narration: Saddam said his country stood up to the challenge from one Bush administration in and, if forced to, will stand up to this new Bush Administration as well.

Saddam Hussein: We hope that war will not take place but if war is forced upon us, then Iraq will continue to be here. This country with a history of over years. This country, the cradle of the first civilizations of humanity, will not finish just like that even though a huge power may want it to be like that. Nobody, nobody should accept that Iraq will finish in such a way.

Rather: Mr. President, I believe I can report accurately, that it's a major concern in the minds of the people in the United States.

Rather: Do you or do you not agree in principle, with the attack?

Translator for Saddam Hussein: Let me tell you absolutely clearly. We believe in humanity. We believe, in accordance with what Allah, the God Almighty, has taught us. In the same way that God has taught humanity as a whole. That there must be a law governing humanity, and governing relations in humanity. That there should not be an aggressor, while others are silent about the aggression. There should not be a killer, while those who watch and applaud the killing.

Rather: Not so long ago, you were clearly hailed by Arabs from Palestinians to Jordanians throughout the Arab world as the quote Arab Avenger. Are you still relevant on the Arab street? Or has Osama bin Laden made you with other Arabs irrelevant? If you can understand the question. Thank you.

Translator for Saddam Hussein: This is not our goal. What we want is not a personal issue. What we want is what Allah wants and what our nation wants. We want our nation to be happy, not to be spoken of as heroes. The most basic thing to be said about Saddam is that he is a true son of his nation… and to say he did his best for his people and his nation.

Rather: And he does or does not agree that Osama bin Laden is now-- the champion of the Arab streets?

Translator for Saddam Hussein: You, how do you see it? Mr. Rather is an intelligent person. I believe that he wants to get to the truth and not merely provoke or to try to get someone to say something that might be held against him. The most essential thing is to stop the aggression against our nation and the Iraqi people. You see how the Palestinians are killed on their land, and their homes are demolished and their properties are destroyed and no one is trying to take away their handcuffs, to free them. So if you in America consider Osama bin Laden a hero, we are not jealous of him. And if the Arabs consider him a hero, we are not jealous of him. Jealousy is for women. And men are not supposed to be jealous of one another.

Go On To Part II: