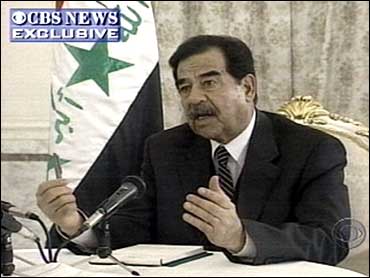 Iraq has never had any link with the global al Qaeda terrorist network, Iraqi President Saddam Hussein said in an exclusive interview with CBS Anchor Dan Rather.

Saddam also insisted he will die before going into exile and indicated he would not set fire to Iraq's oil fields or commit other sabotage in the event of a U.S.-led invasion.

The Iraqi leader contended his country's Al Samoud 2 missiles — which U.N. inspectors have said violate range limits and must be destroyed — are perfectly legal. He told Rather the American people are not his enemy and invited President Bush to debate the merits of a war against his country.

The interview with Rather was Saddam's first with an American journalist in about a decade. Excerpts will air Wednesday on The Early Show and then on a special edition of 60 Minutes II on Wednesday night at 9 pm ET, 8 pm CT.

Discussing the meeting with CBS News Early Show co-anchor Harry Smith, Rather said Saddam appeared to understand the gravity of the situation he faces, in contrast to his attitude before the 1991 Persian Gulf war.

"However, in both what he said and how he said it, he comes across as a man absolutely convinced that it's his destiny to survive," Rather told Smith. "That's critical to understanding Saddam Hussein. He envisions himself as the ultimate survivor."

According to Rather, Saddam believes that while war would impose a terrible cost, Iraq can absorb the attack and maintain resistance, eventually outlasting the invaders.

The charge that Iraq supports terrorism was a major thrust of the case Secretary of State Colin Powell made to the U.N. Security Council on Feb. 5. Powell charged that Baghdad had given refuge to an al Qaeda operative, had links to an al Qaeda linked group in northern Iraq, and sent agents to train terrorists elsewhere.

Asked if he had any connection to Osama bin Laden, the al Qaeda leader, Saddam answered: "Iraq has never had any relationship with al Qaeda and I think that Mr. bin Laden himself has recently, in one of his speeches, given such an answer that we have no relation with him."

In the interview, Saddam answered other key questions about Iraq's weapons and the looming war.

On The Approach To War:
Rather: What is the most important thing you want the American people to understand at this important juncture of history?