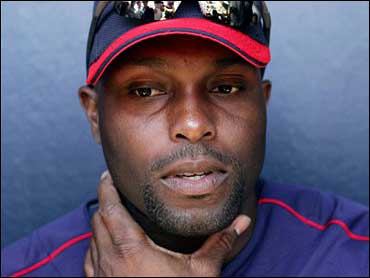 The Ottawa Senators had to put things in perspective following their 4-0 shutout of the Buffalo Sabres.

Saturday night's victory was tarnished by the news that Ottawa captain Daniel Alfredsson is expected to miss 8-10 weeks with a knee injury.

"It didn't hit me until I was watching the game," said Alfredsson, who sustained a third-degree sprain of the medial collateral ligament in his right knee Thursday in a 4-1 win over the Avalanche.

Alfredsson went into the boards heavily in the first period while attempting to check Colorado's Alex Tanguay. He said he won't have to undergo surgery.

Turns out they didn't need him Saturday.

Ron Tugnutt stopped 19 shots for his 12th career shutout, and Marian Hossa scored two goals and assisted on another to lead the Senators to an easy win over the struggling Sabres.

Hess' Will Orders Sale Of Jets

Hossa got his team-leading fifth and sixth goals of the season, adding his third game-winner.

"I don't know what to say, Alfie is such a great player," Hossa said of the 1996 Rookie of the Year, who was off to a good start with four goals and four assists. "It's just too bad."

Shawn McEachern and Steve Martins also scored for the Senators, who remained undefeated at the Corel Centre (4-0-1).

It was the first meeting between the teams since Buffalo swept Ottawa in the first round of the playoffs last season. It also was the second game of a five-game homestand for the Senators.

"We don't have Alfredsson but somebody else gets an opportunity," Ottaw coach Jacques Martin said.

"We gave up two goals in the first period, then played like the game was over," Hasek said. "We were playing the best team in our conference. When it got to 3-0, it was over."

Ottawa has lost only one of its previous 13 regular-season games against Buffalo (7-1-5). All five games between the teams last season reached overtime, with the Senators prevailing 1-0-4.

Tugnutt (4-0-1) earned his 12th career win over Buffalo, his most against any team.

"I don't think they were at their best," he said. "Dominik had a bit of a rough night. We were getting in pretty close on him."

Hossa opened the scoring at 15:18 of the first period on a backhand from the slot.

McEachern, who had a career-high 31 goals last season, notched his first of the season 50 seconds later.

Defenseman Jason York found McEachern at the side of the Sabres net and McEachern, acting as Ottawa's captain in place of Alfredsson, tapped the puck past Hasek while Hossa's goal was being announced.

Hossa assisted on the play, as Ottawa built a 13-4 shot advantage in the period.

"We'll miss Alfie, just like we miss (contract holdout) Alexei Yashin. But you can't use these things as an excuse," McEachern said.

Hossa made it 3-0 with a backhand that trickled through Hasek's pads at 9:13 of the second period. Martins scored while off-balance in the slot exactly two minutes later.