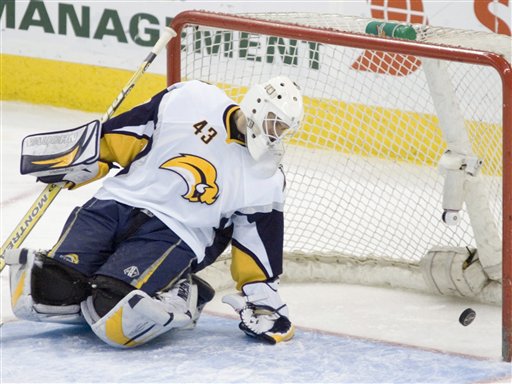 Buffalo Sabres goaltender Martin Biron was traded to the Philadelphia Flyers on Tuesday for a second-round draft pick.

The Sabres then turned around and acquired Columbus Blue Jackets' backup goalie Ty Conklin in exchange for a fifth-round pick in this year's draft.

The moves come hours before the NHL trade deadline and the deal involving Biron was not unexpected. An eight-year NHL veteran, Biron has been seeking a trade since losing the No. 1 job to Ryan Miller early last season. And the injury-depleted Sabres have been looking to free up payroll because they are at the NHL's $44 million salary cap.

Biron was pulled aside and informed of the trade while the Sabres were in Toronto preparing to play the Maple Leafs.

Biron, who is making $2.1 million this season, proved expendable because he is in the final year of his contract and eligible to become an unrestricted free agent this summer.

Conklin is an inexpensive pickup _ he's making $525,000 this season _ and allows the Eastern Conference-leading Sabres to pursue another player to bolster their battered lineup. Buffalo is down eight regulars, including Tim Connolly, who has missed the entire season with a concussion.

Sabres general manager Darcy Regier has said he is interested in adding a defenseman, while coach Lindy Ruff favors adding an experienced forward.

Acquiring Biron gives the NHL-worst Flyers three goalies for now, with backup Robert Esche still heavily rumored to be traded before the deadline.

Starter Antero Niittymaki has nine wins in 47 games and Esche, once considered the future in goal after a stellar postseason three years ago, has played in only 18 games. Esche will be an unrestricted free agent at the end of the season and could be a valuable pickup to a contender.

This was the second trade in two days for the Flyers, who acquired defenseman Lasse Kukkonen and a third-round pick from Chicago for forward Kyle Calder on Monday night. Calder was then traded to Detroit.

Buffalo's first-round pick in the 1995 draft, Biron is the Sabres' longest-serving player.

Biron struggled in his last outing, allowing four goals before being pulled in the second period in a 6-5 loss at Ottawa on Saturday.

Conklin is a five-year veteran and career backup who was playing in his first season with Columbus. He has a 2-3-2 record with a 3.30 goals-against average in 11 appearances.

In making the move, Columbus also announced that it had acquired goalie Brian Boucher off waivers from the Chicago Blackhawks.