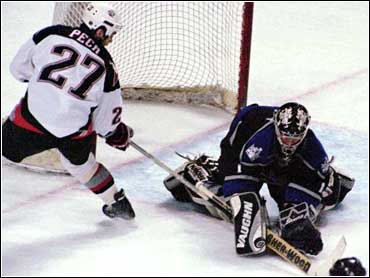 The line combined for nine points and stymied the Kings' line of Luc Robitaille, Ziggy Palffy, and Jozef Stumpel in the Sabres' 4-1 victory over the Kings.

Peca scored twice on back-handers and had one assist. Tsyplakov, traded from Los Angeles to Buffalo on Jan. 24, scored his first goal as a member of the Sabres, and added two assists.

"We had to come up with a game like this," Peca said. "We got some bounces through the goalie, and we went from there."

Varada had three assists as the Sabres moved within one point of the New York Rangers for the final playoff spot in the Eastern Conference.

"We worked hard," Tsyplakov said. "We had good checking, good forechecking, good pursuit of the puck, and good things happened for us."

Palffy scored for Los Angeles, but his goal came 2:58 into the game, when a different Sabres line was assigned to defend the Kings' high-flying forwards who have combined for 48 points in the Kings' last nine games.

Miroslav Satan scored an empty-net goal and Dominik Hasek made 24 saves for Buffalo.

"We beat a good team," Sabres coach Lindy Ruff said. "We fed off a few really big saves by Dom early in the game."

Jamie Storr stopped 24 shots for the Kings, who had their five-game winning streak halted.

"We didn't get the job done like we wanted," Kings coach Andy Murray said. "We can't complain with how we've been doing."

Peca tied the game 1-1 with 2:55 remaining in the first. Tsyplakov passed the puck to the front, where Peca took a back-handed poke and got it past Storr.

Tsyplakov got the game-winner 10:08 into the second when his wrist shot from just below the left faceoff circle went behind Storr's right leg.

"When `Sippy' first got here, he created a lot for his linemates. It was good to see him save it for his old mates," Peca said.

"If there was anybody who had to beat us tonight, I'm glad it was him," Murray said. "He's a great guy."

Peca got his second of the game 7:32 into the final period as he skated wide from behind the net and back-handed a shot through traffic from the slot.

"I think I misplayed the first one," Storr said. "The third one I couldn't even see. It just found a hole."

"It's refreshing (to score two goals)," Peca said. "I've been getting a lot of chances and skating well. To get the goals when we need them is a big bonus."

Satan added his 28th of the season, an empty netter, with 31 seconds remaining.

Robitaille, one goal within tying Michel Goulet for 17th on the NHL's career list, came close twice in the second period. He glanced a back-hander off the post about 2 1/2 minutes in, and was robbed by Hasek on a sliding save midway through the period.