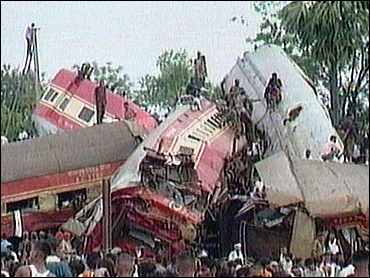 Dozens of people are feared dead after an express train en route from Calcutta to New Delhi jumped the tracks and plunged into a river, a top railway official said Tuesday.

Authorities said they were not ruling out sabotage, because it appeared that the train tracks on the bridge had been tampered with.

Authorities believe that the train tracks may have been tampered with by the People's War Group, militants fighting to establish a Maoist-Leninist state. The PWG rebels, who are called naxalites in India, mostly target rich landowners, police and administration officials, accusing them of working together to deny landless farm workers their rights.

One railroad official, who asked not to be identified, said that the possible sabotage may have been in retaliation for the recent arrest of a senior PWG leader.

One report said 67 bodies had been recovered and another 13 passengers had died at local hospitals. Another placed the number of dead at 69.

"Clearly some forces are behind it," Dattatreya said. "All our security forces have been requisitioned to the site."

According to Deepak Sandhu, a spokesman for the Indian railways system, six railroad cars had fallen into the river, though witnesses at the scene said only one car was submerged under water.

Another railroad official said the train plunged some 300 feet from the bridge into the Dhave River.