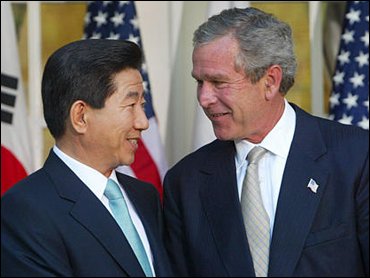 President Bush and South Korea's leader said they were united in seeking a Korean Peninsula free of nuclear weapons, and expressed confidence that the standoff with North Korea could be resolved peacefully.

Meeting for the first time Wednesday, Mr. Bush and President Roh Moo-hyun also reaffirmed the strength of a military and economic alliance that dates to the 1950-53 Korean War, and agreed to consult closely on a possible realignment of U.S. forces in South Korea.

But both leaders also made clear they intend to proceed with plans for revamping America's military presence in South Korea, despite the dispute with the North.

According to the Washington Post, the two presidents agreed to restructure U.S. forces, which might consolidate or even reduce some of the 36,000 American service members stationed in South Korea.

The White House also said it would close a base near Seoul that has been a target of protests.

The moves are a mixed blessing for Roh, who has advocated for a more equal relationship between Washington and Seoul, but also worries about the economic impact of any reduction in U.S. firepower.

The two presidents, who have spoken several times by telephone since Roh was inaugurated in February, focused on getting to know each other. Mr. Bush described Roh as "an easy man to talk to," and Roh said the U.S. president had dispelled his concerns.

"We're making good progress toward achieving that peaceful resolution … in regard to North Korea," Mr. Bush said in a White House Rose Garden appearance with Roh.

But Roh and Mr. Bush did not debate tough questions that might arise if diplomacy with the North fails. Ra Jong-il, South Korea's top security adviser, said there was no mention of the possibility of economic sanctions during the summit.

South Korea wants the United States to be more open to dialogue with North Korea, but Washington says it won't negotiate its key demand that the North immediately abandon its nuclear programs.

Roh and Mr. Bush issued a joint statement asserting that their countries would not tolerate nuclear weapons in North Korea and invited other nations in the region to help defuse the standoff.

The leaders stated their confidence that a peaceful resolution was possible "while noting that increased threats to peace and stability on the peninsula would require consideration of further steps."

"Escalatory moves by North Korea will only lead to its greater isolation and a more desperate situation in the North," their statement said.

The "further steps" mentioned in the joint statement could mean military action as well as "a lot of things in the toolbox," said a senior Bush administration official who briefed reporters after the meeting on condition of anonymity.

The South Koreans, wary of more aggressive action toward North Korea, accepted that vaguely worded reference because Mr. Bush and Roh also agreed that diplomacy and increasing isolation of North Korea were the preferred tactics, the official said.

But South Korean officials have said repeatedly that engaging North Korea was the only way to ease tension, and commentators in Seoul said the wording was a concession to the U.S. side.

"This summit could have some negative impact on future inter-Korean relations," Koh Yu-hwan, a professor of North Korea studies at Seoul's Dongguk University, said.

In contrast, North Korea on Wednesday accused the United States of a military buildup, citing the U.S. decision to keep Stealth fighters in South Korea after annual exercises earlier this year.

Reacting to the talks, the North's state-run newspaper says the only way to end the dispute is for the U.S. to drop its "hostile policy" toward the North.

In their statement, Mr. Bush and Roh welcomed China's role in hosting a three-way meeting last month that included the North and the United States. But the statement also suggested that subsequent talks should also include South Korea and Japan.