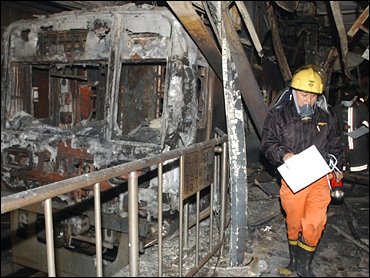 The suspect, Kim Dae-han, 56, has a history of mental illness and has told police that "he decided to die with others in a crowded place, rather than die by himself," said Police Lieutenant Cho Doo-won.

This was not the work of any terrorist group but of single angry man described by police as handicapped, mad with society about his fate in life, out for revenge, reports CBS News Correspondent Barry Petersen.

The disclosure of a possible motive in Tuesday's attack came as criticism of the official response to the tragedy mounted. Grieving relatives of victims complained of delays in body identification, and critics said the attack showed flaws in security measures.

"The government is not hurrying up with the investigation," Kang Mee-ja, whose mother died in the attack, cried as she and other family members on Wednesday looked on the remains of burned subway cars. "As her daughter, I just want to bury her quickly."

The question is also being raised of safety in the subway system. The seats and floor tiles burst into flames and the lights went out, leaving victims to grope in the dark.

Officials admit there are some relatively simple measures they could take to bolster safety on the trains — such as making car interiors flame resistant and installing emergency lighting on platforms and in the stations.

"This incident shows we have a big hole in our social safety measures," said an editorial in the Chosun Ilbo daily newspaper. "This shows that we don't have protection from possible terrorist attacks."

It's a horrific reminder that just a single person intent on killing can strike the heart of any city, points out Petersen.

Investigators on Wednesday were still gauging the human toll of the blaze in Daegu, 200 miles southeast of Seoul. Only 44 of the dead had been identified, and officials feared that more of the 145 hurt could still die of their injuries.

Many of the bodies are burned beyond recognition, reports Petersen. It will take weeks of DNA testing to identify all the dead.

Authorities counted 314 people as still reported missing, but they said the number was greatly inflated by double reports and the enduring confusion over the identities of the dead.

Attention on Wednesday focused on the actions of subway officials, who were being interrogated by police. Many asked why a second train was permitted to arrive at the station minutes after the first train erupted in flames.

One officer, who spoke on condition of anonymity, said the fire crippled the subway communication system, and authorities apparently could not warn the second train — which accounted for most of the deaths.

Critics said the tragedy revealed holes in the nation's emergency response system and a potential vulnerability to terrorist attacks.

"We call for a thorough investigation of whether subway authorities failed to respond quickly and properly when the fire first broke out," the Joongang Ilbo newspaper said, urging the government to tighten security in the subway system.

Subway officials in Seoul, the capital, said on Wednesday that they would install emergency lighting, increase the number of exit signs, make car interiors flame resistant and heighten security in the wake of Tuesday's accident.

Forensic experts on Wednesday began the grim task of gathering scorched bodies and blackened bones for identification. Family members of the missing were permitted to look at the wreckage, which had been towed to a train depot on the outskirts of Daegu.

Teams made a final search for survivors in the subway station where the attack happened.

"Because people could have hidden to escape the smoke, last night we did a final search but we have found nothing," Daegu Mayor Cho Hae-nyoung told reporters early Wednesday.

The estimates of the death toll were erratic in the chaotic hours after Tuesday's attack, with different agencies often giving widely varying numbers for the dead and missing.

The confusion continued on Wednesday. The preliminary death toll was 125 — the 53 confirmed dead and an estimated 72 bodies found on one of the destroyed trains.

But an investigator at the depot where the train was being examined said that officials would not be able to give a number for the bodies still in the charred carriages for some time yet. When asked about the figure of 72 on the train, Jung Nak-eun of the National Institute for Scientific Investigation shrugged.

"That figure didn't come from us," he told reporters.

Firefighters said many bodies were found on the subway stairs, where people apparently suffocated as they tried to escape. On the platform and in the trains were the ashen bones of those trapped in the flames. One man said his missing daughter called by mobile phone to say there was a fire and the subway door wasn't opening.

Police were interrogating Kim Dae-han, 56, who witnesses said boarded the train with a carton of flammable liquid and used a cigarette lighter to light it. Some passengers tried in vain to stop him.

Kim was hospitalized with light burns. Police said he refused to answer questions and spoke incoherently. He worked as truck driver and had once threatened to burn down the hospital where he had received unsatisfactory treatment, local media reported, quoting relatives.

Chung Sun-kyun, a spokesman for President-elect Roh Moo-hyun's transition committee, said that Roh had canceled a town hall meeting scheduled for Thursday, and would also curtail the celebrations as part of his inauguration next week in deference to mourners.

In the meantime, the relatives of victims struggled to come to terms with their grief.

Jung In-ho said his 21-year-old daughter called her mother in a panic as the fire spread through the train and the cars filled with deadly smoke. He held up his cell phone on Wednesday, saying he still calls his daughter's number even though he knows she's gone.

"I feel like she's going to pick up the phone any minute," he said.