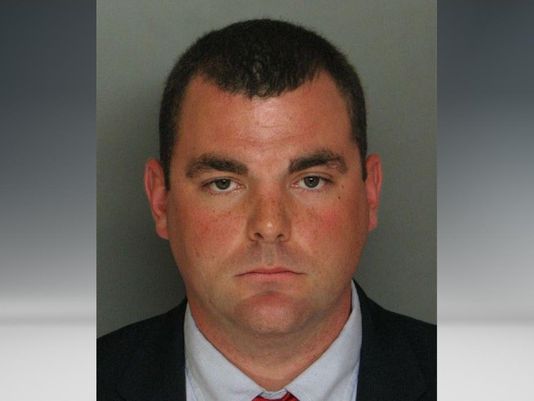 COLUMBIA, S.C. -- A South Carolina police officer was indicted Wednesday on a lesser felony charge nine months after a grand jury refused to indict him for voluntary manslaughter in the fatal shooting of a 68-year-old man following a long car chase.

The Edgefield County grand jury handed up an indictment against Justin Craven on a charge of discharging a firearm into an occupied vehicle, which carries up to 10 years in prison.

Craven, an officer in North Augusta, is the third white police officer in South Carolina since September to be indicted on a felony charge for shooting an unarmed black motorist.

The North Charleston police department fired officer Michael Slager after he was charged with murder for the April 4 shooting death of Walter Scott. The shooting happened after Slager pulled Scott over for what the officer said was a broken taillight on his Mercedes. A video shot by a bystander showed Slager shooting Scott in the back as he ran away.

In January, a judge declared a mistrial in the case of a white ex-police chief charged with murder in the shooting death an unarmed black man. Former Eutawville Police Chief Richard Combs was charged more than three years after shooting Bernard Bailey three times in May of 2011. After the mistrial, prosecutor David Pascoe said he will try Combs again, CBS affiliate WCSC-TV in Charleston reported.

South Carolina lawmakers have been debating bills requiring law enforcement officers to wear body cameras while on duty. The latest version of the legislation passed the state House two weeks ago, according to CBS affiliate WLTX-TV.

The new charge against Craven does not require mandatory jail time. The voluntary manslaughter charge carries a mandatory sentence of from two to 30 years. Officers convicted of any felony can no longer serve on the force. Craven was placed on customary administrative leave while the case was under review, but works in North Augusta now as a building inspector.

Satterwhite's family sued the city over his death and reached a $1.2 million settlement.

Craven tried to pull over Satterwhite for drunken driving in February 2014, but Satterwhite drove away. He led Craven on a chase that went on for about a dozen miles, often over the speed limit, and that brought the two out of North Augusta and Aiken County and into Edgefield County, where Satterwhite lived, authorities said.

Satterwhite stopped his car in his driveway and Craven ran from his cruiser, firing several shots through the closed driver's side door, according to a report from the Edgefield County Sheriff's Office.

Craven told investigators that Satterwhite tried to grab the officer's gun and he feared for his life. His lawyer, Jack Swerling, said Craven plans to go to trial.

"It will all get aired out in court," defense attorney Jack Swerling said by phone after the indictment.

The shooting was captured by Craven's dashboard camera, but the State Law Enforcement Division, known as SLED, has refused to release the footage. Swerling is asking a judge to bar the release until Craven's trial, even though SLED has released dashcam video before trial in other cases. Local media outlets are fighting Swerling's request.

SLED Chief Mark Keel said the video could ruin Craven's chance at a fair trial, WLTX-TV reported earlier this month. The lawyer for Satterwhite's family was allowed to see the video, but had to sign an agreement that he would be held in contempt of court if he released it to the news media.

In August, prosecutors asked a grand jury to indict Craven on the voluntary manslaughter charge, but the jurors refused, instead indicting him on a misdemeanor charge of misconduct in office. That case is still pending.

Craven was scheduled to have a first appearance in court Thursday, but Swerling said he will waive that hearing.