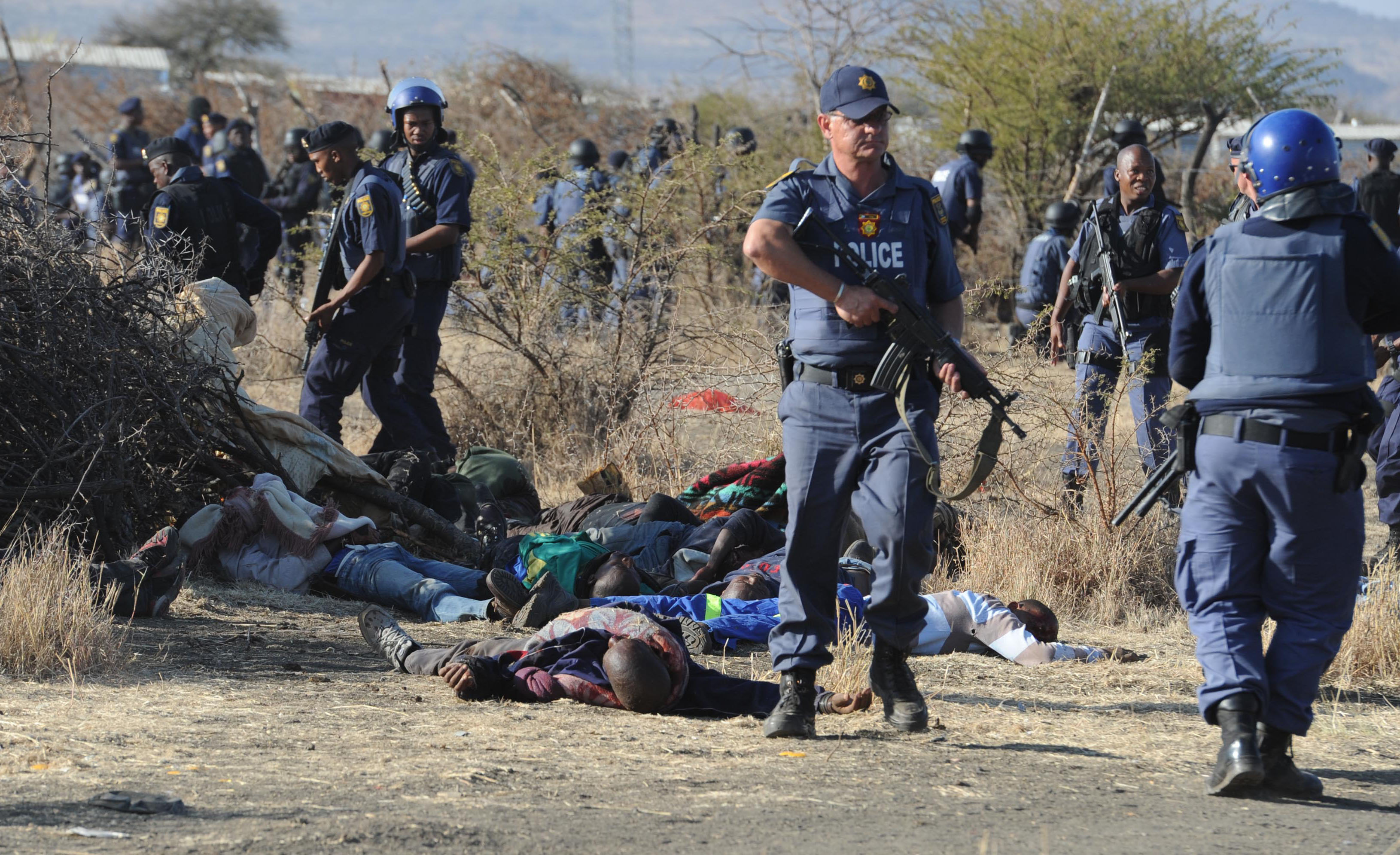 (AP) MARIKANA, South Africa - Striking miners in South Africa threatened to kill workers and managers in a nearby mine Wednesday unless they joined the crippling work stoppage.

Hundreds of the striking Lonmin platinum miners, supported by ululating women, gathered Wednesday near the spot where police killed 34 striking miners on Aug. 16. The striking miners then marched from the Marikana platinum mine northwest of Johannesburg to the nearby Karee mine, which is also owned by Lonmin, and demanded that all workers join the strike for higher wages or face violence and even death.

The striking mineworkers gave working colleagues a deadline of 1 p.m. to leave Karee mine or be killed.

"After 1 we don't want to see anybody in the shaft. Those who come to work tomorrow we will kill them," said one striker who refused to give his name. Another man shouted, "There will be more blood if we do not get 12,500 rand."

A delegation of seven young strikers was allowed to meet with mine managers. They were led past the phalanx of six police armored cars and a water cannon truck to the barbed wire gate of Karee Mine. Behind the gate the Karee mine's two white managers, with an armed security guard beside them, stood with hands on hips as the strikers got down on their knees.

The line of police vehicles separated the green-roofed Karee mine complex from the throng of singing, dancing strikers and their supporters. Police helicopters hovered overhead.

The manager of the Karee mine shaft, Jan Thirion, said: "The delegation from the strikers told me that if I didn't get all the workers out of the shaft by 1 p.m. they would burn down the shaft and kill us."

The strikers subsequently left without molesting anyone at the mine, which apparently continued to operate.

Of the strikers' demands and threats, Thirion said: "It's like keeping a gun against someone's head, saying `You pay us from here on.' If you do that you might as well close all South Africa's mines."

Methodist Rev. Paul Verryn said he found the scene between the strikers' delegates and mine managers disturbing.

"It disturbs me because clearly the hierarchies in this system are going to endanger this entire nation," he said of the gulf between black and white, managers and workers. "You come to one of the richest mines in South Africa and the squalor in which the people are living!" He pointed to the corrugated iron shacks of miners working for the world's third largest platinum producer.

The London-registered Lonmin PLC mine has warned that the strike that began Aug. 10 could cost 40,000 jobs if it continues. The Marikana mine remains shut down with fewer than 5 percent of miners turning up for work.

Tensions are high in Marikana as allegations mount of gross abuses by police against the strikers.

Striker Lungisile Lutshetu was quoted in a Johannesburg newspaper as saying that on Aug. 16 he saw a man shot who was on his knees with his hands in the air.

"He begged for his life ... but the heartless officers riddled him with automatic rifles, which pierced through his body," Lutshetu was quoted as saying in The Star on Wednesday. Lutshetu said he and several other strikers had run away but the police followed them and opened fire. "Those in front of me were shot at close range and fell over me, and that's how my life was spared," he said, according to The Star. He said others were shot dead after being captured by police.

Moses Dlamini, spokesman for the Independent Police Complaints Directorate, told The Associated Press that many allegations have been made against police officers in connection with the shootings. He said the directorate is investigating all complaints and will give all the evidence it has collected to the commission of inquiry appointed by President Jacob Zuma. He said he could not discuss individual allegations.

Another striker, Johannes Mashabela, told The Star that he feels he is "lucky to be alive" after seeing police kill men around him.

Protesters on Wednesday waved a photograph of a young man they named as Mgcineni Noki. They said Noki was shot in the foot on Aug. 16 and was taken to a hospital.

"Police then went to the hospital and dragged him away. They beat him up and they killed him. We found him in the mortuary," said Xolani Mzuzu, a striking miner. But a review of news reports and photos from past weeks indicate that Noki apparently died in the fusillade of gunfire on Aug. 16.

Earlier reports carried by the Pretoria News show what appears to be Noki's corpse lying among other dead miners on Aug. 16. His brother is quoted as saying Noki's body was riddled with bullets.