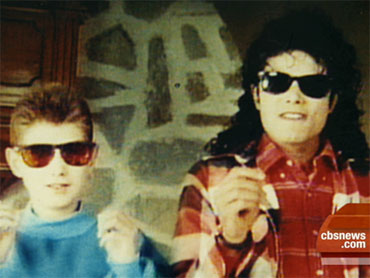 In 1984, White was diagnosed with AIDS at the age of 13 after he received a tainted blood treatment for hemophilia. Ryan became the face for the disease early on in the AIDS crisis, meeting many celebrities, including the King of Pop.

Befriended by Jackson, Ryan and his mother Jeanne White-Ginder both stayed at Jackson's Neverland Ranch in its heyday, and Jeanne, who appeared on "The Early Show" Friday told CBS News the home was "a place between heaven and Earth."

White-Ginder said her son visited Neverland Ranch at times on his own, and loved the movie theater, Bubbles -- Jackson's chimp, and ordering anything he wanted at Jackson's home.

White even got a photo with the pop star, she said, who didn't allow cameras on the property.

White-Ginder said on her request, Jackson asked the Neverland Ranch cook to get a Polaroid camera for White to take pictures during his stay.

As for Jackson's relationship with Ryan, White-Ginder said Jackson was always "amazed" with her son.

White-Ginder added she had no reservations about letting her son stay with Jackson in 1989. White-Ginder said Ryan called her and said he and Jackson watched three hours of "The Three Stooges."

She said White seemed "more mature" around Jackson, who she said loved kids.

Jackson gave Ryan his favorite car, a red Mustang, as a gift a year before he died. Ryan White died at age 18 in 1990. White-Ginder said Jackson sat with her and White's sister at the funeral.

At his funeral, White-Ginder said White's car was on display, and Jackson started it and "Man in the Mirror" was playing.

"The little things made Michael so happy," she said. "You could see it in his eyes. He was smiling from ear to ear, and he said, 'I was the last person that Ryan listened to.' And I said 'yes.' Because Ryan played 'Man in the Mirror' over and over and over again."

But White-Ginder said a special memory is the "Gone Too Soon" song and video.

Three days after White's funeral, Jackson called White-Ginder and said he'd promised White he could be in his next video, and now that he's gone, he couldn't do that. But Jackson found a way. The "Gone Too Soon" video featured footage of White, including his media attention as the face of the AIDS epidemic, his life growing up with the disease, and his funeral.