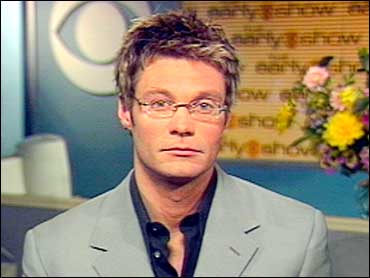 Seacrest, who joined Dick Clark for ABC's "New Year's Rockin' Eve" on Saturday and has called Clark a role model, appears to be emulating the veteran producer with the three-year, E! contract announced Tuesday.

Seacrest will be executive producer of E!'s "Live From the Red Carpet," starting with the Golden Globes on Jan. 16. He'll share hosting duties with designer Isaac Mizrahi and E!'s Giuliana DePandi.

Mizrahi and DePandi will work the red carpet while Seacrest will act as master of ceremonies from a "strategic tower perch," according to the channel.

Star Jones, who handled red-carpet shows for E! after Joan Rivers and her daughter, Melissa, skipped to the TV Guide Channel, won't be part of the team, an E! spokeswoman said.

Series star tells CBS News about the current season of the hit show and how much longer he sees it on the air.

In March, Seacrest will become managing editor and lead anchor of "E! News," joining current anchor DePandi, E! said. He will produce series for the channel through his Ryan Seacrest Productions, and has the option of selling shows to other networks or channels.

Seacrest also will produce and host celebrity interview specials for E! as part of the agreement, which some reports have valued at $21 million. The channel declined to specify the contract's value.

"This is a huge coup for E! ... He is the very best at what he does," Ted Harbert, president and chief executive officer of E! Networks, said in a statement.

Seacrest will have a full plate. He's remaining with Fox's "American Idol" talent contest, which returns for its fifth season Jan. 17, and continues to host the weekly "American Top 40" radio shows as well as his morning radio show for Los Angeles station 102.7 KIIS FM.

Seacrest, who's also a fill-in host for CNN's "Larry King Live" and has signed to take over "New Year's Rockin' Eve" when Clark no longer does the show, has to get busy if he wants to model himself on Clark.

The 76-year-old host and producer, who gained fame as the host of "American Bandstand," is a successful entrepreneur whose empire has supplied TV with movies, game and music shows, beauty contests and more.

Clark's TV appearance on New Year's Eve was his first since he suffered a stroke in 2004, and marked Seacrest's first participation as a host and producer of the special.

A misstep for Seacrest was "On-Air with Ryan Seacrest," a syndicated daytime talk show that was felled by low ratings after nine months.
By Lynn Elber