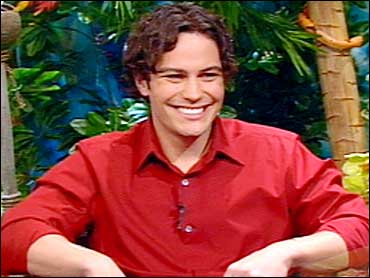 Aspiring actor and model Ryan Aiken turned 24 on Thursday. He spent it with his brother in a New York hotel watching the first episode of "Survivor: The Amazon," the one in which he was ousted by his teammates.

The biggest surprise, he said, was dividing the teams by sex. His strategy was based on starting with a team of both men and women, he told The Early Show co-anchor Julie Chen.

"My strategies - my book of goodies - was gone," Ryan said, explaining, "I work better with women than I do with guys."

For viewers as well as contestants, first episode of the sixth game in the reality TV series was packed with testosterone, struggles and surprise.

The differences between the two tribes - the women's tribe, called Jaburu after the bird, and the men's tribe named Tambaqui after the fish - were soon apparent. The Tambaqui had their shelter up and running before nightfall, and by day two, their camp looked like a well-run village. The women, on the other hand, had no shelter and could barely start a fire after five hours.

While the men spent their spare time bashing the women, it was apparent that the raging hormones were hard to keep under control. Rob spent much of his time gleefully consulting his 'magic' 8-ball hoping for a forecast of physical fun with Heidi, who, he couldn't stop mentioning, was "so hot."

The women, meanwhile, were unable to catch fish and had a terrifying episode with a tarantula. Christy, who is hearing impaired, was feeling the pressure of being unable to communicate with her tribe, especially in the dark when she couldn't read lips. It was clear that spirits were down; Janet, the homemaker, was prepared to go home.

At the first challenge of the series, the men and women faced up for a complex obstacle course, starting with all eight teammates locked together.

But by the end of the game, it was the men who had their tails between their legs. Confident with their early lead, the men were overtaken by the women when rocket science proved no match for the jigsaw puzzle.

The women had finished the puzzle and were on to the next challenge while Dave, the rocket scientist, and Rob, the computer programmer, were just putting together the border of their puzzle.

In the end, the men lost immunity and were sent to tribal council where the vote narrowed down to a battle between the youngest (Ryan) and oldest members of the team. Ryan logged four votes to three for 57-year-old Roger, deemed too "bossy" by some of the team members. The eighth vote was for Dan, who with Ryan had slowed the team on the balance beam.

"Ryan, I think you're a pretty good boy. The only problem is that you're still a boy. Sometimes silence is golden," said Butch as he cast his vote.

One Early Show viewer asked Ryan whether Dan should have been the first voted off since his balance beam performance slowed the team down.

"I would say, like, outright, yeah," Ryan responded. "But strategically, that's not the way it went down because pretty much, Roger and I had animosity the first night and it really wasn't an issue with Dan at all.

"It was kind of like we were going to go head-to-head," he said. "Dave who is from my hometown, D.C., We just pretty much, he just was scared to back my place. He went for a swing vote. He went for a freelance, which is Dan, and that changed the outcome of the game."

In answer to another viewer question, Ryan said he got "probably one of the greatest experiences of my life" out being in the game and said he would do it again without hesitation.

Ryan left the tribe only with kind words, "I learned how to make shelter. More importantly, I learned a lot about myself and how I perceive others and how they perceive me. I thought I'd be mad. But for the first time I really put things in perspective. It was a great journey."

The two tribes are camping near The Amazon's Rio Negro River, which is teeming with piranha and caiman crocodiles. The Amazon was named by Francisco de Orellana, a Spanish explorer who in 1541 discovered the territory. He first encountered a tribe of very fierce and courageous female warriors, so he named the land after the women warriors, explains Probst. He says this is why it is particularly fitting for the reality show to have a tribe of women competing against a tribe of men.