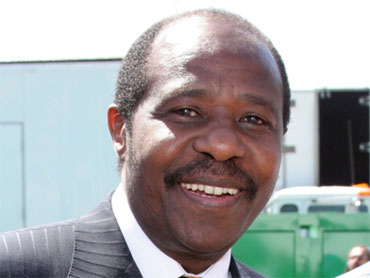 But the former manager, Paul Rusesabagina, told The Associated Press on Wednesday that he hasn't sent any money to Rwanda in years, and that the government is launching a smear campaign against him because he has opposed President Paul Kagame in the past.

Rwanda's top prosecutor, Martin Ngoga, said Rusesabagina helped finance what he described as terrorist activities in Rwanda by helping fund commanders with the FDLR, or Democratic Forces for the Liberation of Rwanda. No formal charges have yet been filed.

Ngoga said he is asking U.S. officials for assistance in gathering evidence. Some of the financial transactions he alleges were criminal originated in San Antonio, Texas. Rusesabagina has a house in Texas but said he has never sent money to Burundi or Tanzania as is alleged by Ngoga.

"Those who want to continue considering him as a hero can go on," Ngoga told a news conference late Tuesday. "We consider him a serious criminal suspect who has been financing FDLR and we are challenging whoever speaks on his behalf to tell us whether he never sent money to these FDLR commanders we have in custody."

After his story was publicized in "Hotel Rwanda," Rusesabagina was hailed as a hero around the world. Former U.S. President George W. Bush gave him the Presidential Medal of Freedom in 2005, the highest civilian honor in the U.S.

However, the government of Rwanda did not view him as a hero after Rusesabagina began criticizing the regime of Kagame, who has since called Rusesabagina a "manufactured hero," according to Terry George, the director of "Hotel Rwanda."

Rusesabagina, 56, who was released from a hospital operation last week to find that his home in Brussels, Belgium had been broken into and documents stolen, says he has done nothing wrong.

"It is the latest step in a campaign against me by the Rwandan government that has included public insults, lies and physical harassment," Rusesabagina said.

"My foundation is advocating for a truth, justice and reconciliation process to try to foster sustainable peace in Rwanda ... but anyone who opposes Kagame inside or outside the country is treated with this kind of harassment."

More than 500,000 Rwandans, mostly ethnic Tutsis and moderate Hutus, were killed in Rwanda's 1994 genocide. Kagame, an ethnic Tutsi, has tried to downplay the role of ethnicity in post-genocide Rwanda, and people in the country rarely refer to themselves as Hutu or Tutsi and can face charges for speaking publicly about ethnicity.

Human rights groups accuse Kagame's regime of iron-fisted control and of silencing opposition politicians and media outlets. Human rights groups and other critics decried the arrest of several opposition figures in the lead-up to Rwanda's August president election, and noted that several others were killed or attacked under suspicious circumstances.

The potential charges against Rusesabagina appear to be intertwined with those against Victoire Ingabire, a Hutu opposition politician who was jailed earlier this month on charges of forming a terrorist group.

Ingabire earlier this year sought representation by Peter Erlinder, a U.S. lawyer who was jailed by Rwandan authorities for about three weeks when he arrived in Rwanda in May to meet with Ingabire. Erlinder was welcomed back to the U.S. in July by Rusesabagina, and the two appeared together on a news program.

"The Kagame regime is beginning to show signs of desperation and lashing out in all directions," Erlinder said Wednesday, adding that the Rwandan government has been working toward charges against Rusesabagina for some time.

Ngoga said that the FDLR commanders in Rwandan custody have given evidence against both Ingabire and Rusesabagina.

Ngoga said Western Union money transfers by Rusesabagina were sent to two commanders in the FDLR with the aim of recruiting fighters for a new military wing of FDU-Inkingi, which is the political party headed by Ingabire.

"We are not talking in general terms, we are mentioning the names, the transactions which were done from San Antonio, Texas," Ngoga said. "It was received in Dar es Salaam and Bujumbura and sent by Paul Rusesabagina himself."

Rusesabagina told AP that the last time he sent money to Rwanda was in 2002 or 2003, and that it totaled at most 1,000 euros ($1,380). He said he supports Ingabire and other opposition candidates through press releases from his foundation and advocates for free, fair and open elections without violence or human rights abuses.

Rusesabagina said he was just released from the hospital following surgery and that when he went to his home in Belgium he discovered someone had broken in his house and stolen documents that are written in a Rwandan language.

"I am asking myself what a Belgian thief might want with documents with only a Rwandan could read?" Rusesabagina said.