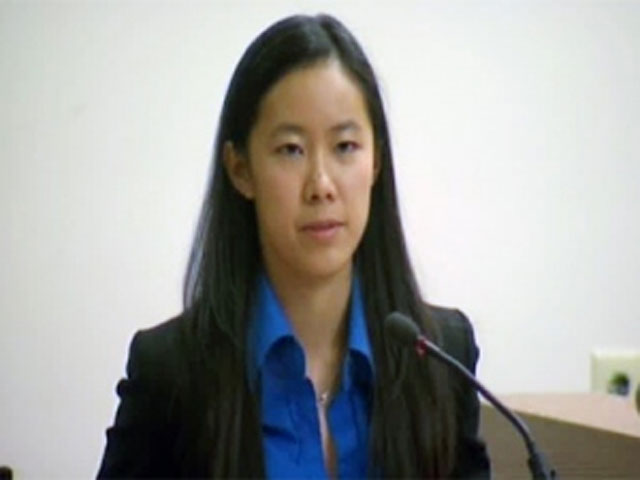 (CBS/AP) NEW BRUNSWICK, N.J. - In her second day of testimony, Molly Wei took the stand in the trial of former Rutgers student Dharun Ravi today and told the jury that she never recorded or broadcast video of Tyler Clementi having an intimate encounter with another man, reports CBS New York.

Wei, also a former student at Rutgers, testified that she only saw live streaming video of Clementi and another man in the room he shared with Ravi back in Sept. of 2010, and was "overwhelmed" when she learned of Clementi's suicide.

Ravi is charged 15 criminal counts, including bias intimidation and invasion of privacy following the suicide of his roommate, 18-year-old Clementi, who leapt to his death from the George Washington Bridge on Sept. 22, 2010. In order to convict Ravi of bias intimidation, prosecutors must persuade jurors that he acted out of bias toward gays.

Prosecutors allege Ravi spied on his roommate to expose his sexual orientation. Ravi's defense has argued that he turned the webcam on in his room to make sure Clementi and his guest did not touch his things.

Wei testified that she was told of Clementi's suicide by campus police. It was the first time Clementi's death has been mentioned in court during the trial.

"At the end of the conversation, the police officers told me that Tyler was missing and that he had possibly committed suicide," said Wei. "I was overwhelmed, very sad and I felt very bad if anything had happened."

Wei said she went to police a few days later when she learned that Ravi had sent Twitter messages inviting followers to watch a second live stream of Clementi when he wanted the room again to himself.

"I was very surprised because my friends brought it up and I had no idea how they knew," she told jurors. "Finally they told me of these tweets that they received on Tuesday about him trying to have a viewing party, things like that."

Wei said she was arrested after telling authorities about the Twitter messages and charged with invasion of privacy.

But Wei said Monday there was never a plan to intimidate or humiliate Clementi.

Wei was initially charged in the case, but she accepted a deal to avoid jail time and potentially a criminal record. She had to enter a pre-trial intervention program and agree to cooperate in the case against Ravi, among other conditions.

In addition to Wei, Rutgers University student Alissa Agarwal also testified Tuesday, saying she remembers Ravi sending a Twitter message daring friends to try to video chat with him the night his roommate asked to have their room to himself.

Agarwal says Ravi went to her room and showed her how his camera was set up to show his roommate's side of his room.

During cross-examination, Ravi's lawyer questioned whether Ravi encouraged others to tune in.