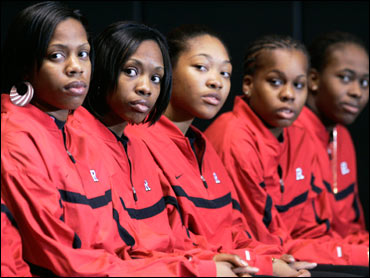 The Rutgers administration and women's basketball team blasted Don Imus' "despicable" remarks Tuesday, but stopped short of saying he should be fired and agreed to meet with the embattled radio host.

In the meantime, however, the televised version of "Imus in the Morning" has lost three sponsors: Staples, Bigelow Tea, and Procter & Gamble.

Rutgers' athletic director, Robert E. Mulcahey III, thought a meeting with Imus offered the team's players a chance to listen to him and hear what he has to say. Several players said they wanted to ask the host why he would make such thoughtless statements.

Ten young women donned their game faces today and walked out onto the national stage, reports CBS News correspondent Nancy Cordes. They were determined to show they are nothing like the derogatory terms used to describe them.

"We all agreed the meeting with Mr. Imus will help," Essence Carson, a member of the team that lost the NCAA women's championship game to Tennessee last week, said. "We do hope to get something accomplished during this meeting."

With uncommon poise for students so young, the Rutgers Scarlet Knights described how they went from elation to outrage in the space of 24 hours, adds Cordes. They went from playing in the college basketball championship to being humiliated on a national radio show.

"Unless they've given 'ho' a whole new definition, that's not what I am," said player Kia Vaughn.

Head coach C. Vivian Stringer said her players "are the best this nation has to offer, and we are so very fortunate to have them at Rutgers University. They are young ladies of class, distinction. They are articulate, they are gifted. They are God's representatives in every sense of the word."

She further said: "While they worked hard in the classroom and accomplished so much and used their gifts and talents, you know, to bring the smiles and the pride within this state in so many people, we had to experience racist and sexist remarks that are deplorable, despicable, and abominable and unconscionable. It hurts me."

"You imagine in sports that the winners circle is genderless and colorless, and they got disabused of that notion rather abruptly," Sally Jenkins, a sports columnist for the Washington Post, told CBS News correspondent Richard Schlesinger.

"The president believed that the apology was the absolute right thing to do," Perino said Tuesday. "And beyond that, I think that his employer is going to have to make a decision about any action that they take based on it."

Imus started the firestorm after the Rutgers team, which includes eight black women, lost the championship game. He was speaking with producer Bernard McGuirk and said "that's some rough girls from Rutgers. Man, they got tattoos ..."

"That's some nappy-headed hos there, I'm going to tell you that," Imus said.

Imus' comments about the Rutgers players struck a chord, in part, because it was aimed at a group of young women enjoying athletic success.

It also came in a different public atmosphere following the Michael Richards and Mel Gibson incidents, said Eric Deggans, columnist for the St. Petersburg Times and chairman of the media monitoring committee of the National Association of Black Journalists. The NABJ's governing board, which doesn't include Deggans, wants Imus canned.

"What I did was make a stupid, idiotic mistake in a comedy context," Imus said on his show Tuesday morning, the final week before his suspension starts.

Asked by NBC "Today" host Matt Lauer if he could clean up his act as he promised on Monday, he said, "Well, perhaps I can't." But he added, "I have a history of keeping my word."

Of the two-week suspension by MSNBC and CBS Radio, he said: "I think it's appropriate, and I am going to try to serve it with some dignity."

The Rev. Al Sharpton also appeared on "Today" and called the suspension "not nearly enough. I think it is too little, too late." He said presidential candidates and other politicians should refrain from going on Imus' show in the future.

"When it comes to race in this country, there are just different standards," said Greenfield on Imus' show Tuesday. But he said he hopes Imus returns from the suspension. "You don't walk away from someone with whom you've had a 15-year relationship because they've done something dumb."

Imus, who appeared on Sharpton's syndicated radio program for two hours Monday, accused the minister of lacking courage for refusing an invitation to appear on "Imus in the Morning." Sharpton said he couldn't tell people not to watch the show and then appear on it. "It's not about courage," he said.

MSNBC, which telecasts the radio show, said Imus' expressions of regret and embarrassment, coupled with his stated dedication to changing the show's discourse, made it believe suspension was the appropriate response.

"Our future relationship with Imus is contingent on his ability to live up to his word," the network said late Monday.

Imus, who has made a career of cranky insults in the morning, was fighting for his job following the joke that by his own admission went "way too far." He continued through the day Monday, both on his show and Sharpton's.

The Rev. Jesse Jackson, who marched with about 50 protesters Monday outside NBC offices in Chicago, said Imus' suspensions will not halt the protests.

"This is a two-week cooling off period," Jackson said. "It does not challenge the character of the show, its political impact, or the impact that these comments have had on our society."

Imus could be in real danger if the outcry causes advertisers to shy away from him, said Tom Taylor, editor of the trade publication Inside Radio. The National Organization for Women is also seeking Imus' ouster.

Imus isn't the most popular radio talk-show host — the trade publication Talkers ranks him the 14th-most influential — but his audience is heavy on the political and media elite that advertisers pay a premium to reach. Authors, journalists and politicians are frequent guests, and targets for insults.

He has urged critics to recognize that his show is a comedy that spreads insults broadly. Imus or his cast have called Colin Powell a "weasel," New Mexico Gov. Bill Richardson a "fat sissy," referred to Sen. Ben Nighthorse Campbell of Colorado, an American Indian, as "the guy from `F Troop,"' and to Gwen Ifill, a black journalist, as "the cleaning lady." He and his colleagues also called the New York Knicks a group of "chest-thumping pimps."

On his show Monday, Imus called himself "a good person" who made a bad mistake.

"Here's what I've learned: that you can't make fun of everybody, because some people don't deserve it," he said. "And because the climate on this program has been what it's been for 30 years doesn't mean that it has to be that way for the next five years or whatever because that has to change, and I understand that."

Baseball star Cal Ripken Jr., who was to appear on Imus' show Tuesday to discuss a new book, canceled the appearance.

"He didn't want anyone getting the message that he agreed in any way, shape or form with the comments," said John Maroon, Ripken's publicist. "It was the right thing to do."

The "Today" show's Al Roker said Tuesday on his show's official blog that it was time for Imus to go. "I, for one, am really tired of the diatribes, the 'humor' at others' expense, the cruelty that passes for 'funny,"' Roker said.

Even Howard Stern of Sirius Satellite Radio, a big fan of unrestricted content, mocked Imus' apology, according to the New York Daily News. "He's apologizing like a guy who got his first broadcasting job," Stern said. "He should have said, '(expletive) you, it's a joke."'

Arizona Republican Sen. John McCain, whose presidential candidacy has been backed by Imus on the air, said he would still appear on Imus' program.

"He has apologized," McCain said. "He said that he is deeply sorry. I'm a great believer in redemption."

Imus' radio show originates from WFAN in New York City, and distributed by CBS Radio. Both, like CBSNews.com are parts of CBS Corporation. The radio program is also broadcast on the MSNBC cable channel.

Imus' fate could ultimately rest with two of the nation's most prominent media executives: CBS Corp. chief Leslie Moonves and Jeff Zucker, head of NBC Universal (which is owned by General Electric Co.).

"He will survive it if he stops apologizing so much," said Michael Harrison, publisher of Talkers. Imus clearly seems under corporate pressure to make amends, but he's nearly reached the point where he is alienating the fans who appreciate his grumpy outrageousness.

Even if he were to be fired, he's likely to land elsewhere in radio, Harrison said.