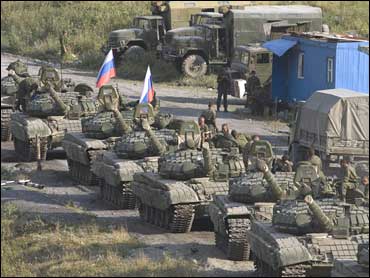 This column was written by James P. Rubin.

Why did Russia really invade Georgia? In late September, Russian Foreign Minister Sergei Lavrov appeared before the Council on Foreign Relations in New York and offered a rather stunning explanation. Lavrov--who previously spent a decade as Russia's ambassador to the United Nations, where he mastered the body of international precedents and U.N. Security Council resolutions that together make up the de facto law of nations--informed his audience that, by attacking Georgia, Moscow was implementing a principle endorsed by the Security Council in 2006: the "responsibility to protect."

Lavrov was referring to the U.N.'s new legal justification for intervention in the internal affairs of a member state. The concept--which arose out of the world's failure to stop genocide in Rwanda--envisions nations joining together to protect potential victims of mass human rights abuses or genocide, even if that means trampling on the sovereignty of another country by using military force. The inaugural test of this new principle came in Darfur. To date, no nation, including the United States, seems willing to live up to this "responsibility." But Russia, according to its foreign minister, is now doing exactly that. "If all this talk about 'responsibility to protect' is going to remain just talk," Lavrov said, "if all this talk about human security is going to be used only to initiate some pathetic debate in the United Nations and elsewhere, then we believe this is wrong. So, we exercised the human security maxim. We exercised the responsibility to protect."

Russia had previously accused Georgia of committing genocide against South Ossetia--despite the fact that the most reliable independent reporting has concluded that fewer than 100 civilians died during Georgia's initial incursion into the region. On August 30, Prime Minister Vladimir Putin said Georgia's goal was the "extermination of the peaceful population in South Ossetia" and asked, "What is this if it's not genocide?" None of this--the accusation of genocide, the invocation of "responsibility to protect"--was an accident. For it was the threat of genocide against Kosovo's Albanians that prompted nato, led by the United States, to initiate military action against Russia's ally Serbia in 1999. Now, Russia is seeking to turn the tables--to exploit the human rights rhetoric of the West in order to establish international acceptance for a sphere of influence in Central Asia and other parts of the former Soviet Union. On September 12, Russian President Dmitri Medvedev made the analogy explicit: "There is certainly no serious argument which would allow one to ... separate the process of the recognition of South Ossetia and Abkhazia from the decisions taken with regard to Kosovo."

According to the International Crisis Group, the United States and Europe are "struggling to come to terms with Russia's attempts to portray its support for breakaway regions in Georgia as a mirror image of what they did in Kosovo." It shouldn't really be such a struggle. For the truth is that Moscow's comparison is nonsense. Kosovo was all about moral intervention. Georgia is all about geopolitical resentment. It is imperative that the West not fall into Russia's analogy trap.

At least since the presidency of Woodrow Wilson, America has been the world's leading champion of self-determination. Russia, on the other hand, is rarely the first stop in a fledgling nation's campaign to win international recognition. Nor is Moscow a top destination for human rights campaigners trying to drum up support for action to stop ethnic cleansing, mass murder, or genocide. Indeed, until Georgia's attack on South Ossetia prompted a Russian invasion of Georgia itself, Russian foreign policy has been marked by a preference for the inviolability of national borders and a downright reluctance to support international action, especially military action, in the service of human rights. What's changed is that, after Georgia's offensive against South Ossetia this August, Moscow saw an opportunity to lock in an analogy to Kosovo--an analogy that was extraordinarily misleading.

It is crucial to remember that, when the crisis began in Kosovo in the late '90s, there was remarkable unanimity among the major powers--the United States, key European governments, and, yes, even Russia. Having lived through the Serbo- Croatian war and the slaughter in Bosnia, the international community initially acted in unison to confront Slobodan Milosevic.

Throughout 1998 and up until nato's military campaign began in March 1999, Moscow joined with Washington and key European countries to pressure the Serbian government. Working together, Russia, Europe, and the United States imposed severe economic sanctions on Serbia and drafted an agreement largely intended to protect the Kosovar Albanians from Belgrade's security forces. Indeed, Russia's foreign minister, Igor Ivanov, frankly admitted to Secretary of State Madeleine Albright that the threat of force might be necessary to convince Milosevic to avoid an all-out onslaught against the Albanians. (He obviously hoped the mere threat of force would be sufficient, since Russia eventually opposed nato's bombing campaign.)

Russia's position at the time is relevant for two reasons. First, while Moscow often quibbled about the details, it largely accepted the Western view that Serbian forces had committed massive human rights abuses against Bosnian Muslims and that the Albanians were at risk of being similarly slaughtered. Second, throughout the crisis, Moscow worked hand in hand with the West to forge an outcome that protected the Albanians. Russia supported U.N. Resolution 1244, which ended the war, eliminated Belgrade's legal control over Kosovo, and even spelled out a path to self-determination.

Today, of course, Russia regards Kosovo as a festering wound to its national pride. Obviously, something happened over the last ten years. And, while Milosevic is gone, the Albanians have their freedom, and Serbia's democracy has been moving in the right direction, the change is not in the Balkans; it is in the foreign policy of Putin's Russia.

At the beginning of the Putin era in 2000, Kosovo was not a particularly contentious subject between Moscow and the West. Although Russia supported Belgrade's position that Kosovo's future status should be a matter of international negotiation, it largely agreed that the oppression of the Kosovar Albanians at the hands of Serbian authorities justified Kosovar demands for self-government. The issue for Moscow was not whether Kosovo would ever again be under the rule of Belgrade. Rather, the question was when and how self- government would come about--that is, whether it would ultimately take the form of full independence or some lesser degree of autonomy.

It was only after the breakdown in relations between Moscow and Washington in 2003 and 2004 that Russia began to harden its position on Kosovo. With Putin fuming that Washington had gone to war in Iraq over his objection--and believing that his cooperative stance on Afghanistan and the war on terrorism was not reciprocated--Russian policy toward the United States took a turn for the worse.

An early victim of this policy shift was the U.N.-sponsored plan for resolving the Kosovo issue. That plan was developed and implemented over three years by Marti Ahtisaari, the former Finnish president and just-named winner of the Nobel Peace Prize. The Serbs remained intransigent, and Moscow rejected the Ahtisaari plan. With the patience of most of the world exhausted, Washington and key European countries decided to proceed despite Moscow's opposition, recognizing Kosovo as an independent country in February of this year.

If nothing else, this history demonstrates that the international community--including Russia--was largely unified during a decade of diplomatic engagement. And the risk of massive human rights abuses was real and generally accepted. The case of South Ossetia could not be more different. Human rights, let alone genocide, have never been a major factor in international decision-making there. And, as for the United Nations's decision to endorse Russia's peacekeeping role in the disputed regions of Georgia, this was a matter of pragmatism, not an international stamp of approval for Russian policy. (With the U.N. peacekeeping system discredited and weak, the international community has, by default rather than by design, begun to rely more and more on regional powers and institutions to bear the burden of tamping down regional conflicts.) In short, Russia's attempt to link South Ossetia to Kosovo has little basis in either history or reality.

Moscow has been quite open about its desire for freedom of action, if not hegemony, along its borders. Indeed, when he was U.N. ambassador, Lavrov himself tried his hand at great-power horse-trading with then-Ambassador Albright--suggesting in the mid-'90s that, if Russia supported the U.N. peacekeeping force needed to prop up a failing democracy in Haiti, then Moscow should be able to count on U.S. support for Russia's peacekeeping mission in Georgia. More recently, Medvedev, in presenting his country's latest comprehensive foreign policy statement, described Russia as having a "privileged interest" in developments along its huge Eurasian border. But, until its fateful decision to launch an invasion of Georgia, Moscow had limited itself to non-military measures--for example, subjecting Ukraine to the manipulation of energy prices and supplies.

Now, however, Russia has crossed a geopolitical Rubicon. In response, the international community and the West must take extreme care not to ratify Moscow's claims of special rights or privileges in its border regions by legitimating its calculated, phony rhetoric about genocide and human rights.

Predictably, some prominent American strategists are already worried that the backlash against Russia will go too far. Henry Kissinger, for example, recently opined on the need to understand--though not accept--Russia's point of view on South Ossetia. Certainly, the Bush administration could have done more to work in partnership with Russia after Putin's commendable decision to support America's response to September 11. Nor was it necessary to rush forward with deployments of missile defenses in Eastern Europe. And I would be the last to defend Bush's flawed diplomacy in the run-up to the Iraq war. But even hinting at the validity of Moscow's absurd analogy between South Ossetia and Kosovo is a recipe for disaster. It would not only dishonor the memories of the real victims of genocide in countries like Rwanda, Bosnia, and Cambodia; it would also give credence to Russia's campaign for privileged rights in the former Soviet Union. And, in the long run, that could jeopardize the freedom of the smaller countries--among them, several nascent democracies--that line Russia's border.

We can be realistic without succumbing to realism. America and Russia share a large number of common interests; we can and should work together on non- proliferation, climate change, terrorism, and the Middle East peace process.

But we must also see to it that Russia pays a heavy price for its use of force in August. Fortunately, this is already happening. Moscow's diplomatic isolation is nearly unanimous. Even before the financial crisis struck last month, Russia's market was collapsing as a result of the Georgian war, making a mockery of Putin's boast that Moscow would soon be the world's financial center. In conjunction with the Putin era's domestic assault on political parties, the press, and civil society, the invasion of Georgia has done long-term damage to Russia's reputation. It will be a long time before Russia is considered a responsible power--notwithstanding Foreign Minister Lavrov's ruminations about the responsibility to protect.
By James P. Rubin
Reprinted with permission from The New Republic