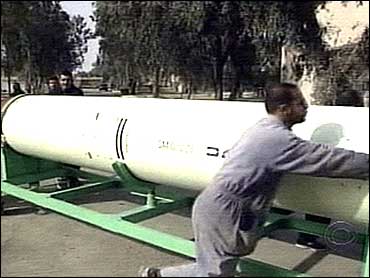 Sources in Baghdad say Iraq is expected to begin destroying its Al Samoud 2 missiles on Saturday.

That word came this morning several hours after another key development in the Iraq situation: a statement from a Russian diplomat hinting that Russia would consider vetoing the U.S.-backed U.N. resolution on Iraq.

"Russia has the right to a veto in the U.N. Security Council and will use it if it is necessary in the interests of international stability," said Foreign Minister Igor Ivanov, at a Beijing news conference.

The foreign minister's comments came a day after China and Russia issued a joint declaration saying war with Iraq "can and should be avoided" and appealing for more time for U.N. weapons inspectors there.

The United States is seeking votes to support a U.N. Security Council resolution authorizing war. France and Russia - both permanent council members with veto power over U.N. activities - as well as Germany are pushing a plan to continue weapons inspections for four more months.

"Of course, if you use the veto power you should fully understand the responsibilities of it before using it. It can only be used for international peace and stability," Ivanov said. "At the same time Russia will not be in favor of any new resolution which allows the use of military force directly or indirectly to solve the Iraqi issue."

As for the order by chief U.N. weapons inspector Hans Blix for Iraq to begin destroying Al Samoud 2 missiles by Saturday, sources say Iraq does not agree with the order, but it has nonetheless decided to comply.

In a letter to Blix on Thursday, Iraq agreed "in principle" to destroy the missiles, which Blix said exceeded a 150-kilometer (93-mile) range set by the Security Council after the 1991 Gulf War.

The Baghdad sources said the order is unjust "and does not take into consideration the scientific and technical facts about those missiles."

"It seems that the timing is related to political goals," the sources said.

Iraq has asked Blix to dispatch a technical team to discuss the "framework and timetable" for carrying out the order, but Blix's top deputy, Demetrius Perricos, was already in Baghdad to discuss "the pace of the destruction" with the Iraqis.

A spokesman in Baghdad wouldn't comment on Perricos' activities or schedule.

The issue of the Al Samoud missiles has become a litmus test of Iraq's will to comply with the weapons inspections. The United States and Britain have threatened war if Iraq isn't seen as complying.

Blix's office said Thursday that it received a letter from a senior Iraqi official saying Iraq accepts the destruction of the missiles and components. But it wasn't immediately clear whether Iraq's letter was an unconditional acceptance of Blix's order.

Blix has ordered Baghdad to begin destroying the missiles because they exceed the 93-mile-range limit set by the United Nations after the 1991 Gulf War. Demetrius Perricos, Blix's deputy, was on his way to Baghdad Thursday to discuss "the pace of the destruction" of the missiles, Blix said.

The Iraqi move was exactly what President Bush expected Saddam to do, but it won't be enough to satisfy the White House, which again labeled the Al Samouds "the tip of the iceberg" of illegal weapons, reports CBS News White House Correspondent Mark Knoller.

The president says it's part of Saddam's campaign of deception, hoping to persuade the U.N. he is disarming when he really isn't.

Meanwhile, the first round of talks at the U.N. Security Council on Iraq ended in bitter dispute Thursday with council members unable to agree on basic issues such as a timetable for weapons inspectors to report next to the council.

Diplomats described a terrible atmosphere within the council, which met behind closed doors for four hours.

The council is split between those who are supporting the Bush administration's calls for the use of force to disarm Saddam Hussein, and others, led by the French, who want to continue weapons inspections.

The White House is pinning its hopes for swift passage of its resoultion authorizing war with Iraq on the next U.N. weapons inspection report. But a draft of that report, obtained by CBS News is, again, far less than the stinging indictment of Saddam the Bush administration is looking for.

CBS News Chief White House Correspondent John Roberts reports the document criticizes Saddam, declaring, "The results, in terms of disarmament, have been very limited so far. Iraq could have made greater efforts." And it sharply questions why recent steps toward cooperation "could not have been initiated earlier." But it also points to more positive moves on Iraq's part and indicates that inspections are making headway.

At the end of Thursday's session, French Ambassador Jean-Marc de La Sabliere said the majority of the council still opposed a U.S.-backed resolution and he pushed the French proposal for additional time for inspections.

U.S. Ambassador John Negroponte didn't speak with reporters although Washington's quest for support on its resolution appeared to be picking up steam with several undecided council members.

Still, ambassadors who spoke on condition of anonymity, said the Americans seemed unwilling to compromise in order to achieve council unity on Iraq.

"This was one of the most depressing meetings I've seen," said one ambassador.

Another described the atmosphere as "bitter and unpleasant."

There was some evidence that Mr. Bush was gaining ground for military action, including signals that Mexico had changed its strong anti-war stance and was now preparing to back the U.S.-driven resolution.

Assistant Secretary of State Christina Rocca was in Pakistan Thursday to lobby for its vote, which could fall in the U.S. column.

But there were also signs that some undecided council countries, such as Chile, were pushing for a Canadian plan aimed at reconciling bitter differences between the U.S. plan and the French-led proposal.

Washington on Wednesday rejected the Canadian ideas, which were aimed at giving Iraq until the end of March to complete a list of disarmament tasks that inspectors are compiling.

The United States still faces an uphill struggle to win the nine "yes" votes and avoid a veto by France, China or Russia. So far Washington is assured of British, Spanish and Bulgarian support and will now likely get Mexico's vote.

In somewhat positive signs for the United States, Russia pledged to work with the United States, and France reiterated the pledge it has consistently made to join a war against Iraq if Paris were convinced Saddam was not disarming.

The administration may have won new ammunition for its position from Blix. He said Wednesday, shortly before submitting a quarterly update on his team's work, that Baghdad has not taken "a fundamental decision" to disarm.

However, South African weapons experts touring Iraq reported that the country is making genuine efforts to disarm and asked the council to give them more time.

The Security Council is not the only challenge facing the United States and its allies.

In Turkey, the ruling Islamic party put off a scheduled vote on U.S. troop deployments until Saturday. U.S. officials, who have been negotiating a multibillion-dollar economic aid package for Turkey, have already expressed frustration at repeated delays in securing Ankara's cooperation.

There were more signs that Iraq has begun preparing for war in earnest: deploying police around key installations in Baghdad, and moving elite troops from northern areas back toward the capital city.

In an exclusive interview with CBS News Anchor Dan Rather, Saddam said Iraq was bracing for a U.S.-led attack. "It is our duty, it is our responsibility to defend our country, to defend our children, to defend our people, and we are not going to succumb, neither to the United States nor to any other power," Saddam said.