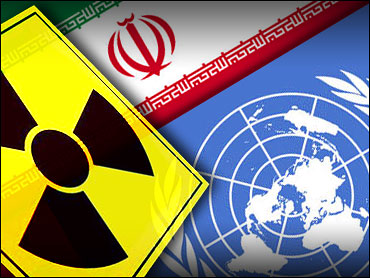 World powers at the United Nations trying to negotiate a response to Iran's growing nuclear enrichment program were stymied Thursday, as the Islamic republic continued a military exercise to flex its defiant muscles.

Russian and China indicated that they will not support a draft U.N. resolution imposing tough sanctions on Iran for its refusal to halt its nuclear enrichment program.

The comments by Russia's foreign minister and China's U.N. ambassador were the strongest reactions yet to the draft by the two key U.N. Security Council members, and signaled difficult negotiations ahead on the resolution drawn up by Britain, France and Germany.

The setback for the U.N. draft came on a day when Iranian state-run television said the elite Revolutionary Guards had test-fired dozens of missiles, including the long-range Shahab-3, during the first hours of new military maneuvers.

The report said several kinds of short-range missiles were also fired in a central desert area of Iran during the maneuvers, which came two days after U.S.-led warships finished an exercise in the Gulf that Tehran described as "adventurist."

"We want to show our deterrent and defensive power to trans-regional enemies, and we hope they will understand the message of the maneuvers," said the head of the Revolutionary Guards, Gen. Yahya Rahim Safavi, in an apparent reference to the US and other western powers.

The general said the 10-day maneuvers, named "Great Prophet," would take place in the Gulf, the Sea of Oman and several provinces of the country. He did not specify how many troops were involved.

The Shahab-3 missile is capable of carrying a nuclear warhead and is believed to have a range of more 1,242 miles. It can reach Israel and U.S. forces in the Middle East.

On the draft resolution, Russian Foreign Minister Sergey Lavrov was quoted by the Interfax news agency as saying: "We cannot support measures that in essence are aimed at isolating Iran from the outside world, including isolating people who are called upon to conduct negotiations on the nuclear program."

"There was an understanding among the permanent members of the Security Council that there would be more difficulties in reaching consensus on Iran than there had been on North Korea, and more interest in negotiations because Tehran remains a member of the Non Proliferation Treaty and because it hasn't test fired any missiles," said CBS News Foreign Affairs Analyst Pamela Falk.

Falk points out, however, that it is "somewhat curious that Russia was the first to protest the draft resolution," given that the Bushehr I nuclear power plant — being constructed by Russia inside Iran — was exempted from the sanctions at Moscow's insistence.

China's U.N. Ambassador Wang Guangya said "there are still different views on what kind of actions the council needs to do under the current circumstances."

Wang said "the major concern" is that some members want tough sanctions like those in the resolution that the council approved on Oct. 14 to punish North Korea for conducting a nuclear test.

The European draft on Iran orders all countries to prevent the sale and supply of material and technology that could contribute to Tehran's nuclear and missile programs. It imposes a travel ban and freezes the assets of people involved in these programs — and also orders countries to freeze the assets of companies and organizations involved in Iran's nuclear and missile programs.

"I think the situation, the cases, are slightly different," Wang said. "Of course, the main concern is nuclear, but I think that North Korea had a test and the Iranians always claim that their programs are for peaceful use."

Unlike North Korea, Iran has signed the Nuclear Nonproliferation Treaty, he said.

Both Russia and China, which have strong commercial ties to Tehran, agreed in principle to sanctions over Iran's defiance of the council's ultimatum to freeze uranium enrichment and dramatically improve cooperation with the U.N. probe of suspect Iranian atomic activities.

But both nations have continued to publicly push for dialogue instead of U.N. punishment, despite the collapse last month of a European Union attempt to entice Iran into talks. The EU had proposed that Iran at least temporarily freeze enrichment as a condition for multilateral talks aimed at erasing suspicions it may be trying to build nuclear arms in violation of its treaty commitments.

Wang said the question is "what is the best way out."

"We want to have a solution of the Iranian nuclear issue, whether sanctions is the right way or whether further negotiation," he said.

The five veto-wielding permanent council members — the U.S., Russia, China, Britain and France — were expected to discuss the resolution this week at the United Nations.

Lavrov said that Russia would seek to focus the document on aspects of Iran's program that the International Atomic Energy Agency has identified as possibly serious risks, including uranium enrichment and a heavy-water reactor, the ITAR-Tass news agency reported.

While Russia and China signaled the draft resolution is too strong, the United States indicated it considers the draft too weak.

Russia's Security Council chief Igor Ivanov indicated in comment Tuesday that Russia could support sanctions as a way to push Tehran into talks, but also left plenty of room for wrangling in the council.

Speaking Wednesday in Moscow, South Korean Foreign Minister Ban Ki-moon, who will take over as U.N. secretary-general on Jan. 1, urged Iran to halt uranium enrichment and accept the incentives in return, Interfax reported.

A Russian Defense Ministry official told The Associated Press on Wednesday that his government would fulfill a contract to supply air defense missiles to Iran unless Moscow decides to back the international sanctions that would make it illegal.

The official, who spoke on condition of anonymity because of the sensitivity of the subject, denied an ITAR-Tass report that said Russia had already started delivering the missiles.