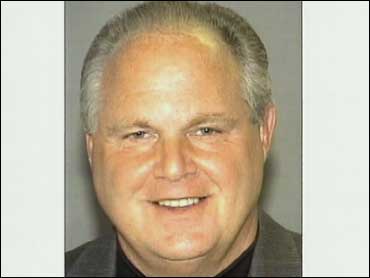 Rush Limbaugh and prosecutors in the long-running prescription fraud case against him have reached a deal calling for the only charge against the conservative commentator to be dropped without a guilty plea if he continues treatment, his attorney said Friday.

Limbaugh turned himself in to authorities on a warrant filed Friday charging him with fraud to conceal information to obtain prescriptions, said Teri Barbera, a spokeswoman for the Palm Beach County Jail. He and his attorney Roy Black left about an hour later, after Limbaugh was photographed and fingerprinted and he posted $3,000 bail, Barbera said.

Prosecutors' three-year investigation of Limbaugh began after he publicly acknowledged being addicted to pain medication and entered a rehabilitation program. They accused Limbaugh of "doctor shopping," or illegally deceiving multiple doctors to receive overlapping prescriptions, after learning that he received about 2,000 painkillers, prescribed by four doctors in six months, at a pharmacy near his Palm Beach mansion.

Limbaugh, who pleaded not guilty Friday, has steadfastly denied doctor shopping. Black said the charge will be dismissed in 18 months if Limbaugh complies with court guidelines.

"Mr. Limbaugh and I have maintained from the start that there was no doctor shopping, and we continue to hold this position," Black said in an e-mailed statement.

Limbaugh spokesman Tony Knight said the commentator signed the agreement Thursday, and that it called for him to enter the not guilty plea. "It's not in the system moving toward trial. It was all a formality. It's a concluded deal," Knight said.

Limbaugh has a huge audience -- 14 to 20 million people listen to his show every week, reports CBS News correspondent Bob Orr.

Mike Edmondson, a spokesman for the state attorney's office, said prosecutors had not yet received the signed agreement.

"I am not disputing the facts, the conditions that Black represented, but until his client signed the agreement, we don't have a full agreement," Edmondson said. "I am sure it's just a timeline issue."

As a primary condition of the dismissal, Limbaugh must continue to seek treatment from the doctor he has seen for the past 2½ years, Black said. Among other provisions, he also has agreed to pay the state $30,000 to defray its investigative costs, Black said.

Prosecutors began investigating Limbaugh in 2003 after the National Enquirer reported his housekeeper's allegations that he had abused OxyContin and other painkillers. He soon took a five-week leave from his radio show to enter a rehabilitation program and acknowledged he had become addicted to pain medication. He blamed it on severe back pain.

Before his own problems became public, Limbaugh had decried drug use and abuse and mocked President Clinton for saying he had not inhaled when he tried marijuana. He often made the case that drug crimes deserve punishment.

Prosecutors seized Limbaugh's medical records after learning about the painkillers he had received at the Palm Beach pharmacy. The investigation was held up as the prosecutors and Black battled in court over whether the records were properly seized.

Limbaugh reported five years ago that he had lost most of his hearing because of an autoimmune inner-ear disease. He had surgery to have an electronic device placed in his skull to restore his hearing. But research shows that abusing opiate-based painkillers also can cause profound hearing loss.

"Over the past several years I have tried to break my dependence on pain pills and, in fact, twice checked myself into medical facilities in an attempt to do so," Limbaugh said at the time. "I have recently agreed with my physician about the next steps."