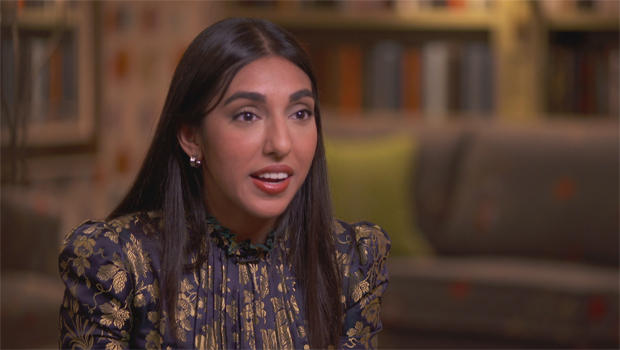 Poet and best-selling author Rupi Kaur inspires people around the world with her powerful words.  She first rose to fame on Instagram in 2015 as a young and controversial voice of feminism. Now she uses social media to share her poetry with millions of followers.

Her first book, "milk and honey," sold more than three million copies and was translated into more than 30 languages.

Her latest book, "the sun and her flowers," also published by Simon & Schuster (a division of CBS), has already sold more than one million copies.

bring your hammers and fists –
we have a glass ceiling to shatter.
let's leave this place roofless.

Rupi Kaur doesn't merely recite her poetry; she performs it … which helps explain the rock star reception she typically receives at public appearances, and on Instagram (where she has more than 2.3 million followers), prompting Rolling Stone to name Kaur "the Queen of the Instapoets."

What is an "Instapoet"? "I feel like there is a group of many, many, many writers and people who are using Instagram as a platform to share their poetry," Kaur told "CBS This Morning" co-host Norah O'Donnell. "They've been dubbed 'Instapoets.' And they've, I think, brought poetry into the mainstream. "

Before landing in the mainstream for her poetry, Kaur first gained notoriety after a controversial post on Instagram. An image of her posing with blood-stained sheets and pants was initially taken down by the social media site. What began as a college art project became a clarion call for women's equality.

"It just turned [from] being a small project to my form of protest," she said.

O'Donnell asked, "If you had to describe where women are right now in the midst of the #MeToo movement, how would you describe that?"

"I think that it's so incredible to see," she replied. "I've seen things that I thought would never change, change. And so that's really exciting, and I'm really proud, and I want to honor the women that came before me."

"Writing is very cathartic. And I've used it as a tool to kind of take myself from a place of victim to survivor, because I don't wanna be the victim. I'm not a victim."

Kaur was five-years-old when her parents moved her and her three siblings from India to Canada.

In her new book "the sun and her flowers," a poem called "broken english" talks about being ashamed as a child of immigrant parents:

O'Donnell asked, "Do you view that differently now?"

"Oh my God, so different," Kaur laughed. "Growing up, it was, like, 'Mom and Dad, my sole purpose in life is to be exactly like everybody else. I don't wanna stand out!'

"And so I put myself in their shoes, and I was, like, 'Wow, like, I don't think I could've done it.' You know, my dad being a refugee, my mum and I being immigrants, I couldn't do it, let alone raise four kids. And that's when I wrote 'broken english,' because I was, like, 'Wow, your life is art. It's not an embarrassment. And you do belong here.'"

Kaur also honors her native language of Punjabi by using only lowercase letters in her poems. The sole punctuation is an occasional period.

O'Donnell said, "Like anybody who does anything that garners a lot of attention, you garner critics. And some have criticized your poetry as being simple, or simplistic.  And to that, you say?"

"Well, it is simple. And it is simplistic. And that's very purposeful from my end," Kaur replied. "I want readers to open up this book and start the poem. And from beginning to end, I want the reading experience to be simple. But when they finish that poem, I want their stomach to turn. And then I want them to sit with that emotion and really work on that."

"Do you see a lot of women like yourself -- and I mean South Asian women, women of Indian descent -- in art, entertainment, on the spines of books?"

"I see it happening more and more," replied Kaur. "I will say that when I was growing up, there were very, very few, and I actually didn't know any of them, because I didn't even have access to them, and they weren't, you know, front and center in my face, although they were there. And, you know, when I was designing 'milk and honey' it was so important to see the word 'Kaur' right on the spine. I didn't even want my first name on it. I just wanted that name. Every Sikh woman has that name. And so I was, like, 'I want a seven-year-old to go into a bookstore and see her name on a book,' because I never got that growing up. If she sees that, she'll be able to see that she can do it, too."