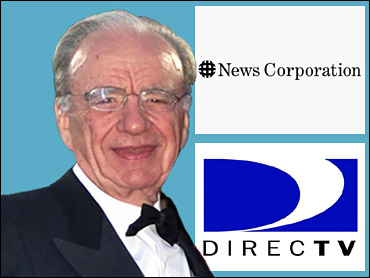 The proposed deal would give News Corp. access to DirecTV's more than 11 million subscribers and conclude media titan Rupert Murdoch's three-year effort to gain a U.S. outlet for his global satellite television network.

News Corp. will pay about $14 per share, making the deal worth about $6.6 billion. The company will then transfer its interest in Hughes to its Fox Entertainment Group subsidiary, which includes the Fox News Channel.

Murdoch, whose News Corp. also owns other media entities and the Los Angeles Dodgers, said the deal will increase competition in the cable markets and provide better services to U.S. viewers.

"With Fox taking a significant interest in Hughes, we are forging what we believe will be the premier diversified entertainment company in America today, with leading assets in film, television broadcasting and production, cable programming, and now pay-TV distribution," said Murdoch, News Corporation's chairman and chief executive.

GM president and chief executive Rick Wagoner said his company "is pleased to have reached an agreement with News Corp. that provides substantial value to our stockholders."

Murdoch unsuccessfully wooed DirecTV in 2001. EchoStar Communications, a rival satellite broadcaster, tried to buy Hughes for $18.8 billion, but that deal was blocked late last year by federal regulators who felt it would harm competition.

The News Corp. deal is also subject to regulatory approval.

The new company will provide "completely open access to our platform to all suppliers" and will not be exclusive to Fox or News Corp. products, Murdoch said in a conference call.

At their convention in Las Vegas, members of the National Association of Broadcasters gave the acquisition a generally positive response, saying it likely would prod satellite operators to carry local stations more quickly. The trade group had opposed the Hughes-EchoStar merger because it would have reduced competition and pressure to carry local stations in smaller markets.

Under the agreement, Murdoch would become chairman of Hughes and Chase Carey, who currently serves as an adviser to News Corp., would become president and chief executive officer of Hughes. The company would continue to be based in the Los Angeles suburb of El Segundo.

Hughes shares, which trade separately from those of General Motors, fell 2 cents to $11.48 in regular trading before the deal was announced, but gained 36 cents in extended trading. News Corp. shares fell 66 cents in regular trading to $27.22 each but rose 50 cents in the after-hours session.