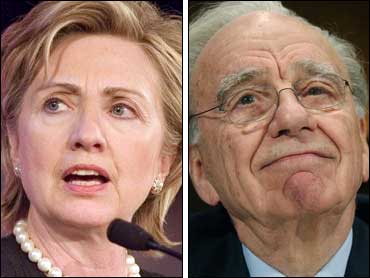 To call them a political odd couple would be a rash understatement.

The mating ritual of the unlikely allies has been under way for months. Clinton set political tongues to wagging last month by attending a Washington party celebrating the 10th anniversary of Fox News, the cable news channel owned by Murdoch.

The Financial Times quoted one unnamed source as describing the Clinton-Murdoch connection in this way: "They have a respectful and cordial relationship. He has respect for the work she has done on behalf of New York. I wouldn't say it was illustrative of a close ongoing relationship. It is not like they are dining out together."

The fundraiser will take place in July, the newspaper said. Clinton is the frontrunner for the 2008 Democratic presidential nomination, though she has not indicated whether or not she will run.

Clinton has worked hard to take the edge off her reputation as a card-carrying liberal. She has has collaborated with congressional conservatives on some peices of legislation, called for a "common ground" on abortion and cut a political figure some on the left see as decidedly un-liberal.

Clinton, who made her debut in the Senate Armed Services Committee four years ago, has never voted against any major Iraq military spending legislation. She has also taken two high-profile trips to Iraq – journeys that may have helped to strengthen the credentials of a senator with no military background or experience.

Clinton, who says she's "always been a praying person," has moved into the territory John Edwards had hoped to claim as the moderate Democrat who cares about the average American.