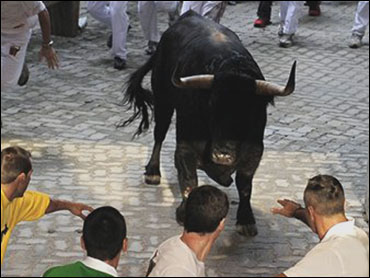 One man was gored and two others injured in a panic-filled third running of the bulls Friday at Spain's San Fermin festival that saw at least three people sent airborne by the beasts.

One of the six bulls caused more chaos when he separated from the pack and prompted several minutes of fear as he charged runners and tried to break through wooden barriers separating onlookers from the bull run.

Professional bull keepers, helped by experienced runners, finally coaxed the bull into the arena to end the run lasting 6 minutes and 23 seconds - more than double the usual time.

Video: The Bulls Are Back
Photos: The Running of the Bulls

Navarra Hospital's Dr. Fernando Boneta said one person was gored in the thigh. Two others were hospitalized for head and rib injuries that happened when they fell or were trampled.

The goring victim was a 20-year-old Briton, and the other victims were a 39-year-old Briton and a 46-year-old Spaniard, the Navarra region's government said in a statement. They were identified only by their initials.

Thousands of people took part in the morning dash ahead of the bulls and six bell-tinkling steers who try to keep the beasts together along the 930-yard (850-meter) course from a holding pen to the northern town's bull ring.

Light early morning rain left the route in Pamplona's historic old quarter slippery, prompting the bulls and the runners to repeatedly skid and fall on the cobblestoned streets.

Some of the most dramatic moments occurred when several runners just missed being gored by bulls that used their snouts and foreheads to slingshot the runners into the air and crashing down on the streets.

Two people who were gored in Thursday's run remained hospitalized on Friday.

Day 2: 2 Gored At Running Of The Bulls
Day 1: Ole! Running of the Bulls Begins

The runs, eight in all, are the highlight of Pamplona's nine-day street festival, which also features around-the-clock drinking that attracts tens of thousands of people, many from abroad, eager to party.

The event is broadcast live on Spanish television and the bulls that run each morning are killed in the evening in the bullring, their meat served up in Pamplona's restaurants.

Dozens of people are injured in the runs each year. Gorings produce the most dramatic injuries and generate extensive comment in Spain's media, but most hurt runners sustain their injuries after falling or being trampled. Last year's festival saw the first fatal goring in nearly 15 years.